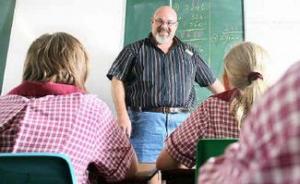 Primary school children risk facing a lack of adult male role models, as fewer than 20 per cent of primary school teachers are male.

While the number of female primary school teachers continue to grow, it appears male educators are a rare breed.

Mark Osborne, from Immaculate Heart Primary, is one of only two male teachers at the Leichhardt school.

“There are plenty in high school, but we are lacking male role models for children in primary school.”

Mr Osborne, who marks 32 years as a teacher this year, said primary education was a calling.

“I come from a heritage of strong role models,” he said.

“Throughout my primary school years I had lots of male teachers who all had a positive influence on my life.

“My advice to other young men who may be considering a career in teaching is don’t be put off by the fact it’s not the most highly paid job.

“Take up the challenge because the rewards are great.”

Having three aunts as primary teachers and a solid foundation of good role models encouraged him to take up the career but said his days weren’t without challenges.

“This job requires you to keep an open mind and adjust to things that are forever changing quickly,” he said.

“There are many things you have to adapt to.”

“This trend is similar in all states and territories of Australia,” Mr Allen said.

“The Department of Education and Training is an equal opportunity employer and has recruitment campaigns to attract the best possible candidates.”