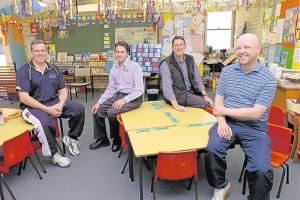 The men share decades of public school teaching experience between them and are standing strong in a public sector that is seeing a decrease in male employees.

A report from the Bureau of Statistics released this week shows there has been a four per cent fall in male teachers in public schools since 2000, particularly in primary schools.

It’s a trend that the men at Bowen Public School are happily not coming across.

While the NSW Federation of Parents and Citizens Associations has described the figures as alarming, the male teachers at Bowen aren’t too concerned.

“It’s what people bring to the job that’s important.”

The teachers agreed it was more important to have a range of new and experienced teachers than to have concerns over a teacher’s sex.

The drop of men in public schools has been blamed on a number of factors, the two main being fear of being accused of child sex crimes and male teachers heading to the private sector.

This is evident with a 20 per cent increase in male teachers joining non-government schools since 2000.

Teacher Dimitri Anikin has worked in both public and private schools and said young teachers were not being encouraged to choose between either sector when at university, and it simply came down to personal choice.

The BOS Social Trends study showed male teachers in public schools had fallen from 50,000 to below 48,000.