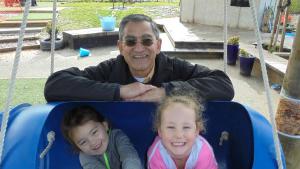 Ministry of Education data shows that the number of male teachers in early childhood has jumped from 129 in 2005 to 494 at last count in 2014.

But a researcher who has worked on the issue for 25 years, Dr Sarah Alexander, says men still make up only 2 per cent of early childhood teachers – less than their 2.3 per cent share in 1992.

The male share dropped to a low of 1 per cent in 2005 before recovering to 2 per cent in 2014 – a “disappointing” result that Alexander puts down to “persistent sexism”.

“We hope change begins before the end of the year and funding is announced by the Education Minister to meet the costs of necessary activities such as unconscious bias training for Ministry of Education staff and teacher educators,” she said.

“The alternative is another 20 years of sexism in our early childhood education system.”

Cyrus Taraporvala, a former racehorse trainer in India who retrained as an early childhood teacher when he came to New Zealand with his Kiwi wife in 2007, believes he provides an valuable role model at the Hobsonville Point Early Learning Centre, where he is the only male out of 17 teachers.

“It’s not that I can do anything different, it’s just what we portray to the kids,” he said.

“That gender balance is so important for children, it’s just offering that role modelling.”

He said men might also take a different approach with children.

“Men love to play – especially with boys, it’s that rough and tumble play that I think is a unique aspect of men being involved in the sector,” he said.

Alexander said many men were scared off childcare by the case of Peter Ellis, a teacher at the Christchurch Civic Creche who was convicted in 1993 on 16 counts of indecency involving seven children. Ellis was jailed for 10 years but has always maintained he was innocent.

“Before the Peter Ellis creche case, men were much more likely to be employed in childcare centres than in kindergartens,” Alexander said.

“This changed following the abuse case, as kindergartens with older children were perceived as providing a safer environment to work in than childcare centres.”

She said the numbers of men in early childhood started to rise again after 2007 when state funding increased to provide 20 hours free education for children aged 3 and 4.

Alexander herself also helped to found a network of men in early childhood, EC-Menz, in 2007, and offers a $400 grant to “invite” men into training for the sector through her other organisation, Child Forum.

EC-Menz president Russell Ballantyne, who runs a Dunedin early childhood centre with his wife Sue, said the Government campaigned to attract women into trades but did nothing to encourage men into teaching young children.

“It’s not healthy for children because the message they are getting is that working with children is women’s work. That takes you back to the 1950s when women were at home looking after the kids,” he said.

Taraporvala believes the fear of being accused of abusing children “has worn off a bit now”.

“Everything is so tight now in terms of security around children, there’s always someone else in the room with you.”

“I still have situations where male teachers are working in environments where centres feel obliged to change their nappy-changing policy because they have a male teacher, where parents complain if they see a male teacher comforting a child who fell over in the playground,” he said.

“It’s not just up to centres to employ more male teachers.

“We have to get tertiary institutions to train more, we need to get the Ministry of Education to encourage that involvement through good support about the importance of male role models in childcare, and we need to have the Human Rights Commission turn a blind eye so we can have gender-biased advertising [to recruit men].”