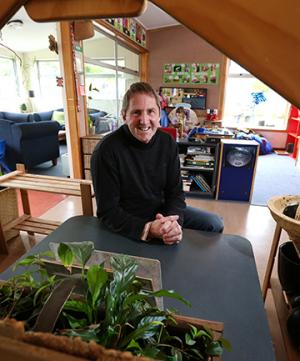 Educators are urging more Southland men to train as early childhood education teachers, with only three working in the region.

The latest Annual Census of Early Childhood Education Services figures, released by the Ministry of Education and relating to June 2012, show only three of the 367 licensed early childhood teachers working in Southland were male.

Nationwide, this equates to one male teacher to every 48 females, but in Southland, the ratio is only one to every 121 female teachers.

Southern educators have attributed the dearth of male teachers to the requirements of training and the stigma of historic sexual abuse cases.

Kindergartens South general manager Lynley Henderson said it was a shame there were not more men working in Southland early childhood education centres, as male teachers were great role models for young boys.

There was only one male teacher working in the association, with another in training in Te Anau, she said.

Occasionally men asked her how to get into kindergarten teaching, but many found the process difficult as they were often the main providers for their family and could not afford to take three years off work for training, she said.

She believed New Zealand policy-makers needed look to places such as Scotland, where there were monetary incentives for males undertaking early childhood education training, to encourage more Kiwi men to train.

She had taught at a centre with a male teacher “many years ago”, and it had been great, she said.

“The boys just loved it, kicking a ball around with him, just being able to do that boy sort of thing.”

Men were probably put off from joining the profession after “a bit of a scare years ago”, but it was a rewarding career which more males should consider, she said.

One “bit of a scare” often credited with deterring New Zealand males from taking up teaching, especially early childhood education, was the much-publicised Peter Ellis case.

Ellis was convicted of sexually abusing children at a Christchurch creche in the early 1990s and spent several years in prison, although subsequent appeals saw three of his 16 convictions overturned.

Of the 144 students studying early childhood education through the University of Otago College of Education in 2013, only one was male.

Between 2009 and 2012, seven males graduated from the University of Otago College of Education early childhood education programme.