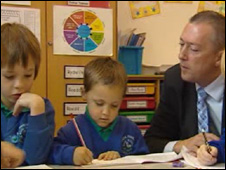 The number of male primary teachers in Wales currently stands at 2,140, compared to 11,807 women.

According to figures from the General Teaching Council for Wales (GTCW), women make up 84.7% of registered primary school teachers.

He said a whole generation could be left without them during their formative years in school.

The number of male teachers is even fewer in nursery education, with only one registered in Wales in December 2009.

“A lot of men go into secondary teaching rather than primary, I don’t think people realise how varied the curriculum is in primary schools, it would be great for people to have an insight,” he said.

“I work in a great team with excellent teachers, excellent practitioners and learning support assistants and we never allow ourselves to be in a one to one with a child – that’s for their protection and ours as much as anything.

“It’s the world we live in, you never put yourself in a compromising situation. You don’t want it to interfere with your relationship with the children, you don’t want it to be sterile, but there are lines and boundaries and I feel very comfortable”.

Anna Davies said her son Charlie was taught by Mr Dobson, who calmed him down on his first day at school.

“I think that aspect – having a man in the classroom – is really helpful. No one wants to leave their child screaming in school,” she said.

“Ben was able to help him, stop him crying and help him to get into nursery, which he then really enjoyed.”

Head teacher Lyn Griffiths said: “Our feeling is that good quality male teachers working here have had a positive impact. They’re able to inspire both boys and girls and, in some instances, those boys without a male role model at home, it helps to inspire them to achieve.”

Jane Williams, from the early years department at the University of Wales, Newport said: “I think the reasons so few men come into early years education are firstly a public suspicion of why men want to work with young children, due to coverage in the media of paedophilia.

“Also, there is the lack of a credible professional career structure resulting in low wages and poor status, and there is a perception of it being regarded as a female role.”Go to website to watch video.