on January 25th, 2010 Posted By BG in World News
by Naomi Westland - Telegraph.co.uk 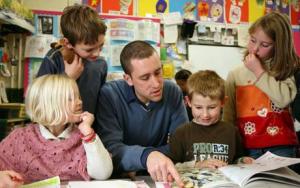 There is currently such a shortage of male primary school teachers that when one starts working at your child’s school he is often welcomed with the kind of fanfare usually associated with the discovery of a new species.

“I was so excited when I heard that Daniel would be having a male teacher in year two,” says Amanda Daniels, 38. “Up to now he has only had female teachers, who have been great, but I think it’s really important that children get to see both sides.”

The teacher causing all the excitement at Ravenstone Primary School in Balham, south London, is 32-year-old Matthew Friday. Not only is he a man, but he has the added wow factor of being a professional writer who has published short stories and hundreds of poems, had plays produced and worked on scripts for Hollyoaks. He has just started his second term.

But the career change left some of Friday’s friends wondering how he would cope with a class of 30 six and seven year-olds. “I have high expectations of behaviour and have learnt how to set clear boundaries,” he says. “The children respond really well to that. It is so rewarding to see them inspired and to watch the progress they make. It’s an absolute privilege to be responsible for the education of 30 young minds.”

With the rewards come challenges, though, and for male teachers these go beyond the well-reported excessive workload and need to meet Government targets. Primary school teaching is still largely seen as “women’s work” so men often wonder how and where they will fit in, says Friday.

“People expect male teachers to fit into one of two stereotypes: sporty and practical or effeminate and ‘therefore gay’,” he says. “I am neither, so I’m in a sort of uneasy third place. People can be suspicious of your motives and feel they need an explanation, which they don’t with female teachers.”

Recent Government figures show that girls still outperform boys in primary school. Despite parents and children saying they want more male teachers, research from Durham University found that their presence does not in itself improve boys’ grades. It is, says the TDA, the quality of the teaching rather than the teacher’s gender that makes the difference.

Simon Horrocks, 40, a Year 6 teacher in Folkestone, Kent, says that where male teachers really make a difference is as role models.

“Some children come to school and they haven’t had very good experiences of men,” he says. “Here they see that men can be kind, responsible, enjoy helping people and encourage learning. That is good for their academic and holistic development.”

There are signs that the gender imbalance could start to change. Teaching is a recession-proof career and refugees from the financial crisis are flocking to teacher training courses in search of job security. Enquiries to the TDA have risen by 40 per cent since April last year, when the sub-prime market collapsed and talk of recession began.

Matt Payne, 33, was recently made redundant from his job as an architectural technician. Payne had thought about teaching on and off for a few years. But it is only now, in his thirties, that he feels he has the “life experience and confidence to go into teaching with the passion and enthusiasm it needs and that children deserve”.

“Being made redundant has forced me to finally think seriously about pursuing a career in teaching. My main concern is how other people will view my decision. Teaching still doesn’t fit into the stereotypical view of work men should do,” he says.

Friday agrees: “There is too much work and a lot of pressure, but I have some really experienced colleagues who are great role models for me. It is the only job I have ever really enjoyed doing and I feel so lucky that I don’t dread Monday mornings.”

The Training and Development Agency for Schools runs taster courses specifically for men interested in teaching. For information visit www.teach.gov.uk/talent