on November 30th, 2010 Posted By BG in World News
by Bruce McDougall - The Daily Telegraph - Australia 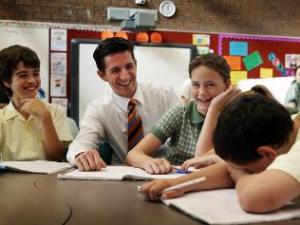 Children face going through school without ever having a male teacher because of falling numbers of men in primary schools.

Male teacher numbers in Government primary schools have dropped below 20 per cent for the first time in a decade as classrooms become female-dominated.

Catholic primary schools across the state have even lower proportions of men, with only about 15 per cent of teachers from kindergarten to Year 6 being male.

Teacher of eight years Scott Carroll said there was a stigma attached to men who worked with children: “Primary teaching is traditionally associated with females – perceptions need to change.”

“I like guys in my school, role models are important,” Ms Corrigan said.

The decline showed an election commitment by state Labor seven years ago to “work to increase the number of male teachers, especially in primary schools” had failed.

With just 4695 men in the public primary system, there are children who have never been taught by a man.

Parents have said that, because of the high level of single-parent families in many areas, it is important young children are taught by male as well as female teachers.

Many principals agree, telling The Daily Telegraph it is critical that more men work in primary schools.

NSW education chiefs argue that gender is not the most important factor in seeking suitable applicants.

A Government spokeswoman said: “There is no definitive research that students, learn better from a particular gender – it is the quality of the teacher.”

Low social status, poor wages and fear of being labelled a paedophile were identified as factors in men shunning primary teaching.

The Australian Catholic University said the presence or absence of male teachers had “major implications for the culture of schools”.