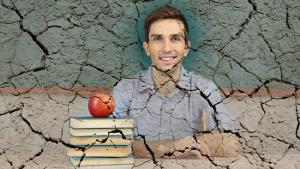 There’s plenty to be said for life as a primary school teacher: a decent starting salary, quick career progression, enviable working conditions and more leave than you can shake the proverbial stick at.

Add to that the low barrier to entry, with teaching degrees having among the lowest Australian Tertiary Admission Rank scores, and you’d think there’d be no shortage of candidates lining up to educate our offspring. But for a variety of reasons, men are shunning the opportunity to become teachers, and that could have dire consequences for boys.

If you have primary school-aged children then you’re acutely aware of just how few male teachers are in the system. Latest figures show that eight out of 10 teachers in primary schools are female.

The shortage of male teachers has many worried about the impact on boys, particularly those lacking male role models within the family unit. Some boys can go through their entire primary school years without having a male teacher.

That’s a problem in a country with about 1 million one-parent families, the vast majority of whom are single-mother families.

It shouldn’t be up to the education system to provide positive male role models for children but the reality is that many boys lack male authority figures in their lives and would benefit greatly from having male teachers.

The gender imbalance in classrooms across Victorian primary schools is nothing new — it was being discussed and worried about 20 years ago — and yet, despite countless programs to encourage men into the profession, there has been little change in the numbers.

Back in 1999, a study by Australian Catholic University suggested the reasons for the shortage of male teachers included the fear of being labelled a paedophile and the belief that working with young children was essentially “women’s work”.

Male teachers bring a different dynamic to the classroom and as with any workplace, it’s not healthy for one gender to completely dominate an industry.

It has long been established that boys and girls learn differently and that girls generally outperform boys in many key areas during primary school years.

Some educators believe the lack of male teachers in the vital primary years adds to the disparity between the sexes.

Research conducted by academics Dr Mark Sinclair and Kevin McGrath in 2013 found male students in Australia preferred to be taught by men due to the belief they shared similar interests, experiences and attitudes.

It found the presence of male teachers was also considered advantageous to girls, but the greatest benefit was to the social development of boys.

The scarcity of male teachers is also a problem in the US and the UK; 25 per cent of British schools do not have a single male teacher.

As with Australia, many education experts believe the lack of male teachers has a great deal to do with boys struggling in the classroom. A study by the London School of Economics found male students were more engaged and tried harder in classes led by men.

That in turn led to boys scoring higher academic results if they had a male teacher. If we are serious about lifting the performance of boys, then getting more male teachers in the classroom is imperative. There needs to be a shift in community attitudes that consider work with small children as an inherently feminine pursuit.

The gender disparity is not as pronounced in secondary schools where four in 10 teachers are male, however men and women do still tend to gravitate to specialties.

According to the latest Australian Council for Educational Research paper, about 75 per cent of physics teachers are male while 66 per cent of English teachers are female. Computing, IT and mathematics are dominated by male teachers while women prefer the arts and languages.

Despite what education unions tell you, Australian teachers are among the highest paid in the world. Not only do graduates have a starting salary of more than $60,000, well above many other professions, but Australian teachers reach the top of their pay scale in just nine years compared to the OECD average of 25 years.

Compare that to Finland, arguably the world’s best education system, where teachers earn considerably less than their Australian counterparts.

All children, whether they come from traditional or one-parent families, would benefit from greater diversity in the classroom.

Perhaps if the profession of teaching was held in a higher esteem then more capable candidates, from both sexes, would choose to become educators.