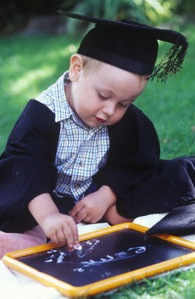 A campaign was launched to encourage more men to become primary school teachers to counteract the shortage of male role models in schools.

The Training and Development Agency for Schools (TDA) has organised events in schools around the country. Hundreds of men will attend the sessions in which school staff will talk about why they should join the profession.

In the past year there has been an increase in men inquiring about teaching in primary schools; this may be due to the fall out from the credit crunch, with many men looking to switch to a more secure profession. Around thirty per cent more men have enquired about primary school teaching. One in five teaching course applications were from men, while the number accepted on courses has risen from 15 per cent to 18 percent.

Experts say it is important that children have a male role model in school and especially important for boys to have someone of the same sex to talk to and learn from.

In a survey by the TDA, more than 800 men were surveyed in a study to uncover the impact of male primary school teachers in boys’ development. The research revealed that 35 per cent of men felt that having a male primary teacher challenged them to work harder at school and 22 per cent believed that male primary teachers helped build their confidence while they were young.

The men surveyed reported that they were more likely to approach male teachers with issues of bullying (50 per cent), problems at home (29 per cent) and questions about puberty (24 per cent).

She says: “The need for strong male role models as constants in the lives of young children is more apparent than ever in light of the increasing numbers of children growing up in single parent families or not having a male figure at home. Male primary school teachers can often be stable and reliable figures in the lives of the children that they teach. They inspire children to feel more confident, to work harder and to behave better.”

Tina Frost, a teacher on the Isle of Wight, agrees that in most cases young boys respond better to male authority figures and that the lack of male teachers is a serious problem.

She says: “A boy having a positive male role model to relate to and aspire to is imperative in a boy’s development into a kind and responsible man.” She believes more male teachers would improve boys’ behaviour, and in turn, school grades. She says: “This has been a problem for absolutely ages. It is so important that we encourage men to enter into the profession, as they can make a real difference to children’s futures.”

The TDA’s Chief Executive, Graham Holley, says: “Not everyone can be a sports star or TV star, but they can be a ‘star’ in the classroom and help inspire thousands of young minds. We need to celebrate the important roles both male and female teachers play in schools, and work to redress the gender balance to ensure the healthy development of children today.”

The TDA offers information and support to men who want to become primary school teachers. Find out more including details of teaching taster courses on the TDA website.