on April 15th, 2012 Posted By BG in World News
by Katherine Danks - The Daily Telegraph 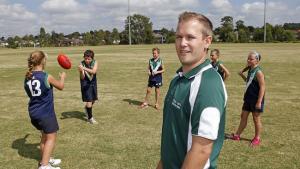 The number of male teachers has grown 25 per cent since 2001.

At the same time, the number of male teachers has dropped 2 per cent at the nation’s public schools, Australian Bureau of Statistics figures reveal.

Schools have struggled to attract male teachers to the female-dominated profession.

Teachers can earn more money in the non-government sector but there can also be more demands outside school hours, such as Saturday sport.

The NSW Department of Education and Communities said the national trend was reflected at the state’s schools but they also had a very low resignation rate.

Last year there were 15,274 male teachers at public schools, representing about 27 per cent of teaching staff.

A department spokesman said strategies were in place to recruit more male teachers but quality was more important than gender.

One man happy to be working in the public system is 29-year-old Mark Platt, who teaches Year 6 students at Kellyville Ridge Public School.

The school has almost 800 students from the boom suburbs in Sydney’s northwest and nine male teachers – a rarity in the public primary system.

Mr Platt said the pay rate was probably the reason men were attracted to the non-government sector but he enjoyed the challenges of a public school.

“I’m happy where I am and couldn’t see myself at another school,” he said.

The school’s assistant principal, Luke Hogan, said he chose to teach at a public school because he believed in its values.

He said male teachers could provide a positive role model to boys who may not have a man in the family home.

“Every child deserves to have access to an education, whether their families can afford it or not,” he said.

James Galea, 24, is the only male teacher in his nine-person faculty at Mitchell High School in Blacktown, which he said reflected the perception that teaching was not an attractive career path for men.

The English and drama teacher said his wife taught in the non-government sector and earned more money than him but the main difference between the two sectors was facilities.