on April 9th, 2015 Posted By BG in World News
by Tina Tenneriello 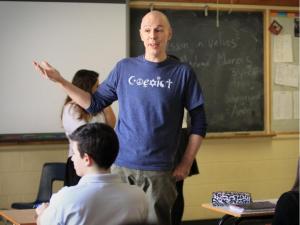 Statistics from Quebec’s education ministry show there are fewer male teachers than ever in our schools.

The numbers obtained by the Journal de Montreal show close to 2000 men have left teaching over the past five years.

Overall males represent 21.6 per cent of teachers in schools, five years ago it was 23.3 per cent.

In high schools the portion of male teachers is slightly higher, 36 per cent.

In elementary school, it’s 15 per cent, and in kindergarten it’s 2 per cent.

“I’m not surprised at all, but I’m disturbed by these numbers because it’s hugely important that there’s a gender balance in the teaching profession, the number of students that come from single parent families is growing every year so I think it’s important to have role models of both genders is schools,” Robert Green, a teacher at Westmount High School said.

Green believes this also has an impact on the number of boys dropping out.

“Students need to see themselves reflected in the teachers in front of them, and there needs to be a variety because students have different learning styles.”

“It’s not just a problem, it’s a crisis, there are school boards where 50 per cent of boys are not graduating in this province, anything we can do to help these kids, we have to be trying.”

Green says teaching has become unattractive because government cuts make working conditions more difficult and because wages are too low.

“Quebec’s teachers are the lowest paid in Canada and we’re facing a government that is proposing to lower our salary by 7 per cent. There’s so much things about teaching that are amazing but the frustrations that we’re dealing with are really starting to make it untenable.”

“They have to address the crisis that exists in the teaching profession, that means investing in public education, maintaining the class size maximum, maintaining the support for special needs students.”