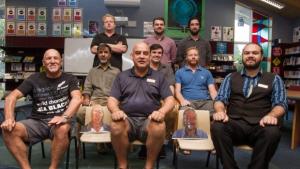 There are 10 male teachers at Hamilton’s Rhode Street School and six females.

Rhode Street School is reversing the national trend in which women make up about 84 per cent of the primary teaching workforce.

Teaching is in Sam Allen’s family and he carried on the tradition.

“I wanted to be a teacher so if there was any kid like me they would have someone that would understand what it was like to always talk and be very fidgety and active,” he said.

Male teachers seemed to gravitate towards intermediate level or above, and move out of the classroom into management.

There were not often teachers of junior students and physical contact, such as kids trying to hold their hand, could be an issue, he said.

At one school he was told “it’s alright if the females do it but not you”.

Males made up about 16 per cent of the teaching staff in New Zealand primary schools in 2015, according to Ministry of Education data.

That covers everyone from the principal to guidance counsellors.

At secondary level the numbers were more even, with 42 per cent male and 58 per cent female.

A gender balance on teaching staff was important to reflect the roll and for kids from one-parent families, Rhode Street School principal Shane Ngatai said.

“In a lot of schools it’s really hard to attract quality male teachers, they get picked up pretty quickly,” he said.

Some kids weren’t taught by a man until intermediate.

He didn’t believe there were barriers for male teachers but said some could be stigmatised.

Rhode Street School has policies and procedures around contact with students to deal with that, he said.

Male teachers were also more likely to need to be careful of their size compared to small students and their deeper, louder voices.

“The kids, they really look up to me and it’s a really freaky idea because I have just finished school last year,” he said.

He was frustrated by people jumping to conclusions about a man teaching young children.