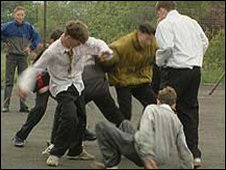 Schoolchildren are more likely to disrupt lessons if they have a male teacher, a survey suggests.

The National Union of Teachers (NUT) polled 1,500 of its members in 13 English local authorities.

Although the survey found a general improvement in pupil behaviour since 2001, 77% of males said they had a lesson disrupted at least once a week.

Of the women, 66% reported disruption on a weekly basis – down from the 2001 figure.

The survey showed that 69% of men and 57% of women had been sworn at by pupils.

And up to 80% of men and 71% of women reported pupils answering them back. However, there was a drop in the frequency of students being defiant in class.

Christine Blower, acting general secretary of the NUT, said the analysis demonstrated how “misleading” gender stereotypes could be.

She said: “Despite the impression given by some national figures that women teachers are more subject to experiencing bad behaviour than men, the evidence is that it is male teachers who sometimes experience greater levels of poor pupil behaviour.”

Fewer teachers overall reported being threatened by parents over the course of a year, compared with the NUT’s last survey.

Approximately 25% of male teachers and 17% of females reported threats, but these figures were down from 30% and 22% respectively in 2001.

However, a minority reported being threatened on a far more frequent basis.

Around 4% of male and 3% of female teachers reported being threatened by parents on a weekly basis, up from 2% and 0.5% since the last survey.

Most teachers reported a reduction in “unwanted physical contact” from pupils, including pushing and touching.

But just over 15% of male teachers and 10% of females still had to deal with the problem each week.

Ms Blower said: “Whilst the evidence from the study is that there have been some welcome improvements in pupil behaviour in the majority of schools, we cannot afford to neglect teachers who daily make a positive difference to the lives of young people from the toughest backgrounds.”

“Neither can extra support for these teachers be subject to pre-conceived notions about whether male or female teachers are better at tackling unacceptable behaviour.”

The NUT said it was a matter of “very real concern” that six in 10 teachers had not received any training helping them to deal with behaviour problems.

Meanwhile, the Conservatives have suggested that thousands of children are being suspended from schools for offences that could warrant expulsion.

Last year, there were more than 200,000 suspensions from state schools in England for offences including sexual abuse, assault, and actual or threatened violence, according to government data.

Official government guidance says expulsion should only be used as a final step.

However, it advises that in “exceptional circumstances”, listed as violence against staff or pupils, sexual abuse, drug dealing or carrying a weapon, it may be appropriate to exclude a child for a first offence.

Last week it was revealed that police forces in England sent officers into schools in response to complaints of violence on 7,000 occasions last year.