on September 5th, 2017 Posted By BG in World News
by Emily Baker - The Canberra Times 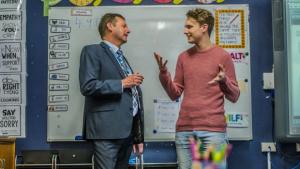 Julian Hofsink didn’t think twice about his gender when he applied to study a Bachelor of Secondary Education at the University of Canberra.

But the second-year student will be in the minority should he work in ACT schools once he finishes his degree.

The number of men teaching in Canberra schools has hovered around 22 per cent since 2012. The figure is slightly higher in non-government schools, sitting near 30 per cent.

The thought of being outnumbered doesn’t bother Mr Hofsink, whose father, Erik, is principal at Emmaus Christian School.

“It purely comes down to the person.”

The ACT Education Directorate could soon coordinate a recruitment drive aimed at getting more men in Canberra schools.

A directorate spokeswoman confirmed the department was working on strategies to attract more men to teaching jobs.

“The directorate strives to ensure the best teachers work in our classrooms with successful applicants displaying strong academic qualifications and the aptitude and passion need to become a teacher, regardless of their gender,” she said.

“Our focus going forward is on retaining and recruiting quality teachers, including devising strategies to increase male applicants, particularly in the primary school sector will be a factor of consideration in future planning.”

The gender imbalance isn’t specific to Canberra with about one in four Australian teachers male. A 2004 push to introduce scholarships to would-be male teachers was shut down after it was found to be discriminatory.

Western Australia released a Males in Primary drive in 2015 to try and attract more men to the profession.

Australian Education Union ACT secretary Glenn Fowler said he believed men were turned off teaching because of the low pay and derisive public commentary aimed at the profession.

The teacher of 13 years said it wasn’t an issue at the forefront of members’ minds.

“The males I know that work in primary schools – and there aren’t that many of them – are generally accepted, content people,” he said.

“They are welcomed with open arms and treated particularly well I would say.

But, he added: “The demographics of staff should be broadly in line with the community. It’s problematic to have an imbalance in any direction.”

The elder Mr Hofsink said gender wasn’t relevant to a teacher’s aptitude. The elephant in the room, he said, was parents’ wishes.

“It’s not unusual for principals to hear ‘I want my child to be with a male teacher. It’s time that he or she gets some role modelling’,” Mr Hofsink said.

“There’s always a level of I know what you’re asking for, and that may be that in the back of my mind I know the male is missing at home or it’s a single mum and she’s craving for her son to get some good male attention and role modelling.

“You need to be sensitive to who asks you, but there’s usually the same answer.

“We can’t adhere to everyone’s requests, especially in a small school, but our role modelling is good in other ways: through sport, through culture, through science.”

Mr Hofsink found his calling as a teacher after his native South Africa offered incentives to men to enter education.

“For me, the gender difference is genuinely not an issue,” said the teacher of almost 30 years.

“It’s about pedagogy, it’s about knowing students’ learning styles and things like that. Some females are champions at it and I guess those who are not give up quicker.”