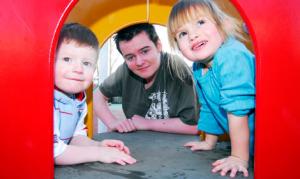 When Matthew Ruddy saw his primary school’s first male teacher walk through his classroom’s door he knew he wanted to work with children.

More than 10 years later 19-year-old Matthew is training at the University of Teesside to work in childcare.

But he is only one man in a group of 70 students in his year, and across the whole of the three-year early childhood studies degree there are only four men out of 200 students.

The figures mirror the fact that childcare is traditionally, and continues to be, a female-orientated profession.

Statistics from the Children’s Workforce Development has shown more parents would like their children to have a male childcare worker.

The figures show in the North-east 51% of parents want a male childcare worker, 44% say it is important for boys to have someone to look up to who sets a good example, and 68% say their son or daughter’s childcare provision does not include a man.

Geraldine Oliver, programme leader of the BA Hons early childhood studies at the University of Teesside, said men questioned whether a man could be a carer, and the salary also put them off.

“The levels of responsibility of people who look after children and the amount of work required of them in terms of children’s learning and development is far more responsibility than their wage reflects,” she said.

She said a male childcarer can provide children with a role model of how a man behaves.

“We have so many single parent families and the majority are headed by a woman. Very often there is a dearth of male models.

“A man childcarer can relate to a three or four-year-old boy who may be getting boisterous – they will be able to relate to that and take that energy because they are a boy too.

“Children who don’t get access to a man can actually be afraid of men. If they have a confident and controlled childcarer who is male they can see what it is like for a man to look after them.”

Matthew, from Middlesbrough, has worked with seven and eight year olds and three and four-year-olds during his course.

He said: “I’ve wanted to work in childcare since I was nine or 10 and the first male teacher in the school taught our class. He was like a role model.”

Matthew, who attended Archibald Primary School, said it was daunting at first to be the only man on his course: “I’ve got used to it now and a career in early years is going to be like this.”

He added he believed it was important that men worked in childcare. He said: “I enjoy it because every day is different, especially with the kids because they are so individual.”

Laura Gaunt, 18, from Guisborough, who is doing the course with Matthew added: “I think men get to act as role models for certain children who don’t have that role model at home. A social study has been done which shows how behaviour is affected when the child does not have a male role model, especially boys. Boys sometimes respond better to a man.”