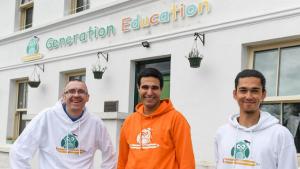 A group of male pre-school teachers are keen to banish gender stereotypes linked with the childcare industry as they lead the way for men entering the sector.

Mark Walsh, Eduardo Heredia and Maidar Gutierrez, who are employed as male childcare workers at Generation Education pre-school in Glounthaune, are calling for more career guidance counsellors in schools to suggest childcare as a career option for teenage boys as well as girls contemplating what to do with their lives.

Some 98.2% of the childcare industry in Ireland is currently made up of females. This is in spite of a slight rise that saw men working with children increase from 1.5% between 2017 and 2021.

Generation Pre-school in Glounthaune, which also offers an after-school service, is one of few childcare facilities in Cork with three male employees. It has in turn been described as one of Cork’s most progressive and diverse workplaces.

Mark, Eduardo and Maidar jokingly refer to themselves as “Irene’s angels” as a nod to the setting’s owner Irene Heredia Ariño.

Growing up Mark, in particular, had never pictured himself in the childcare industry.

“That was back in the eighties when you never saw anyone male working in a creche or pre-school. I was like all the other little boys at the time who wanted to be firemen or soccer players.

“I don’t think that anything should be regarded as a so-called male or female career. There should just be careers and that’s it.”

Meanwhile, Eduardo said there is an even smaller uptake of childcare roles from males in his hometown back in Spain.

“It’s around 90% female in pre-school and 80% in primary school,” Eduardo said. “It’s part of the culture because historically women were always in charge of education and childcare. I studied for a degree in primary school teaching in a class that was dominated by females.”

However, the 25-year-old insists he never suffered any disadvantages.

Maidar, who also hails from Spain, said he had initially dreamed of becoming an actor.

“I have been working with kids since the age of 18 when I was volunteering with children’s Summer camps. I realised I was good at it and that was what started my path into childcare. When I was little I used to love pretending to be the teacher because that was the person who was in charge.

“I wanted to be an actor so I could pretend to be anyone I wanted to be. My hope was to be on the stage or on television but this is not so different. You are constantly pulling silly faces and showing the children lots of emotions as any entertainer would.”

He described the importance of gender balance for the next generation.

“It’s important to have a male as well as a female role model to look up to as well. That way the child can see you as a figure to follow and look up to. A lot of the time they only see female pre-school teachers so it would be nice to change that for the next generation coming through.”