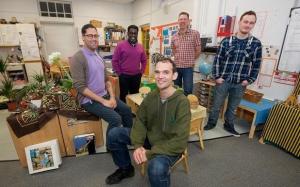 “For far too long we’ve had an upside down education system – with all the emphasis on the importance of GCSE, A Level and university,” explains Jay Ramsey, 40, a nursery teacher at St Werburgh’s Park School in Bristol. “But research shows that the influence of a good quality nursery environment continues to be felt right through to GCSEs and A Levels – and these benefits can even be measured economically.”

Ramsey, who has worked in the profession for the past eight years, is something of a rarity. Despite UK government attempts to change the gender ratio of teachers in Early Years, 98% of them are women. In no other public sector department is the imbalance so severe.

But changes are afoot – thanks, in part, to an initiative Ramsey set up. The Bristol Men In Early Years Network helps ensure that the city bucks the national trend significantly – with 7% of its nursery teachers being men.

“The network has more than 50 members and works to engage more men into the sector, becoming a hub of research on men in childcare and ideas of masculinity,” explains Shaddai Tembo, 22, an Early Years worker and network leader.

Schools are desperate for more quality male teachers and it’s in early years that the need is most chronic.

“Female colleagues report a positive impact on the children – they often comment that it is good to have male energy in the staff team,” explains Ramsey. “The children always respond very positively to male teachers and our members report that the overwhelming majority of parents are very keen on having more men in classrooms.”

Parents tell members they believe it’s ‘better for boys to see men valuing their education.’ Single mums have also told the Shaddai that they really value their child having a positive, stable, caring and strong male role model in their lives.

The network cites research on gender equity in early years which points towards a balanced male-female workforce being needed to address the typical gendered stereotypes we are often fed. But whilst there’s a groundswell of opinion that a male influence in the classroom is important – the numbers of men choosing to work in Early Years especially remains extremely low.

“It’s not a job that’s promoted to young men considering their career options,” says Jay Ramsey. “When I did my training there were very few men on the course, and I was the only one who went on to teach at nursery level.”

“It’s seen as being a low-status occupation or perceived as the bottom end default option for girls at college,” says Ramsey. “But we underestimate the importance of a good early years teaching environment – and having a mixture of female and male role models is important, both for boys and girls.”

The network organisers concede that they also have to work hard to change the views of some people about men working with young children.

“Some parents think we must be a bit weird for wanting to work with children and many members report having to work harder to gain the trust of some parents than their female colleagues,” explains Ramsey, who adds that fears over false accusations being made against them is another barrier to men taking up nursery and reception teacher posts.

“We’re conscious that high profile child abuse cases within the mainstream media have only fuelled prejudice around men in early years too,” adds Tembo. But both Ramsey and Tembo insists that the network’s support and promotion of male teachers and their effort at tackling prejudice is benefitting teachers, schools, parents and most crucially young children.

“When I first came into the profession, my nursery didn’t have any other men,” says Ramsey. “Now we have four, which is great. It has involved changing the wording of a few of our policies and explaining to parents that men undertake all the same duties as our female staff members, but it is now usual for every child at our nursery to have a male as part of its immediate staff team – and this is perceived as normal which is fantastic.”

With the backing of Bristol City Council the network is now embarking on a profile-raising project at secondary schools around the city – highlighting the importance of Early Education and the rewards of working in early years as a career for young men.

“We want to increase the credibility of childcare as whole, a career with children is for everyone” says Tembo. Though he concedes that the financial ‘value’ the position holds and traditional gendered views on men and women means he’ll have his work cut out trying to convince more potential life-changing males into the role. “It’s ludicrous that, with the knowledge that good early years care provides children with the best start in life, many of us are still paid a negligible wage for our work.”