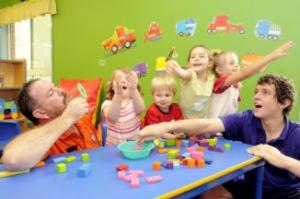 The centre has two male staff members, Brian Bugden and Tristan Bell-Blissner, who are proving a big hit with the children.

Ms Bell said having male staff was unusual for the childcare sector but she said it had become a selling point at Aspley, which caters for more than 100 families.

“Childcare has traditionally been seen as a female-dominated industry,” Ms Bell said.
“But as it has changed from a cottage industry to a sector where people have to have qualifications, it has opened up the scope for men.
“It is good for the boys at the centre because if they don’t see themselves represented among the carers, how will they understand that caring is done by men and women?”