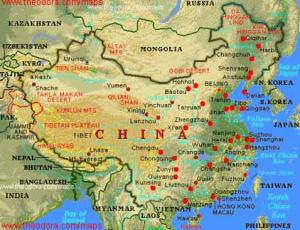 A teacher training college in the city of Bozhou, east China’s Anhui Province, recently released a report which shows that almost 90 percent of its students are female, suggesting that few men are choosing to enter the profession nowadays.

There is a blackboard in front of the main building where students, or anyone who wants to, can write and leave a comment.

One student said that she has not talked to a boy for such a long time so that she decided to call her dad, as he was the only male she can talk to. Another female wrote that she found herself living in a “kingdom full of girls”.

Later, a young male student from the university remarked it was a privilege for him to attract attention from teachers and members of the opposite sex as he is one of a few males in the class. But, he added, he needs to attend the class on time, since teachers quickly notice his lateness or absence.

The wide gender gap is not the only concern, however. The availability of toilets on campus is considered a problem for some. Due to the large amount of female students, several men’s restrooms had to be converted into women’s.

The report shows that only one male was enrolled in the college to teach preschool education in 2014.

Bao Gensheng, a teacher from the university’s School of Preschool Education, said that it was particularly difficult to find male students to enroll in majors that are traditionally considered to be for women – for instance, dancing, preschool education and foreign languages.

Officials encourage more men to apply for these subjects, so that schools will not suffer from lack of male teachers in future.

Bao also said that Bozhou University is not the only one to have a huge gender gap on campus, as this is quite common in other teacher training universities, too. Similarly, some universities of science and engineering are full of boys, and girls are reluctant to study subjects such as science, or do not consider a career as a scientist.

Liu Jingping, director of the career guidance office in Bozhou University, believes that college students are not likely to be affected by this unbalanced gender ratio on campus because school learning is the biggest priority during their college years.

Boys from teacher training universities seldom feel a sense of superiority as they get along well with their female peers, Liu added.

(Source: anhuinews.com/ Translated and edited by Women of China)