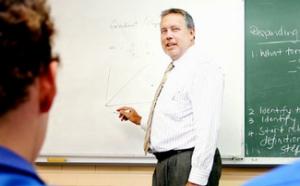 An Ipswich school is defying trends and putting men back in front of the class with more male teachers than women.

But in comparison, there were almost seven female full-time teachers to one male teacher in Australian schools last year, according to the Australian Bureau of Statistics data.

St Edmund’s College assistant principal and maths teacher Wayne Warren said male teachers could engage with male students on a different level to female teachers and it was important to have a balance.

“The importance of the male role model cannot be underestimated,” he said. “I think probably the major benefit is that males like active learning … and male teachers have an automatic appreciation of that.

“If they can be out measuring something in the yard for mathematics or tinkering with something in science or a workshop … they’re physically doing something rather than reading textbooks.”

Mr Warren said a lower salary discouraged many talented young boys from considering a career in teaching if they could use their knowledge elsewhere for a bigger pay cheque.

And he said schools were often about building relationships and women were more likely to be that way inclined. But he said women tended to work in groups better and could help boys have a greater understanding of compassion.

“We have males and females working together here and it mirrors the community and they get a perception of the male and female perspective,” he said.

Year 12 student Joshua Seage said he liked male teachers because he could relate to them better than female teachers.

“We don’t have to be on our best behaviour and they understand us better and know what we’ve been through,” Joshua said.

The 16-year-old said his male teachers were better at controlling students’ behaviour than his female teachers.

Year 12 student Luke Pszczonka, 17, said he had a different relationship with female teachers to male.

“We will listen to them and take in what they say but with males it’s a more shared-talk, discussion-type scenario,” Luke said.