on January 3rd, 2015 Posted By BG in World News
by Afshan Ahmed - The National UAE 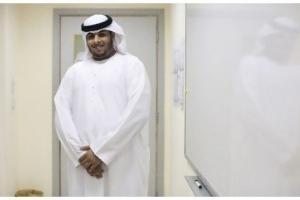 When Saeed Al Ameri was asked three years ago to pick a career, he did not hesitate. He wanted to be a teacher.

His Emirati classmates teased him. Long hours, they said, and terrible money.

But Mr Ameri’s response was simple: “I want to be a role model for young Emiratis.”

He said: “Being in a career with a small amount of local talent, I will be unique and will stand out.” That, he added, was his way of “making a difference”.

Next year, Mr Ameri and five others will be the first male Emiratis to graduate from the Emirates College of Advanced Education (ECAE), the UAE’s first teacher training institute.

He will enter a government school classroom armed with a new style of teaching, the New School Model, which aims to move teaching away from textbooks and introduce more interactive, interesting lessons.

Mr Ameri and his five classmates will account for a 10th of the country’s 60 or so male Emirati state school teachers.

It is not hard to see why so few men have chosen the same path. An Emirati teacher earns, on average, Dh16,000 a month – far less than other government positions.

Ahmed Al Mammari, in his third year of a teaching degree, knows he is one of few.

“I am looking forward to teaching young learners and fostering an identity in them,” Mr Al Mammari said. “But I believe the profession can be made attractive to more male Emiratis through higher salaries, good training and motivating while they are studying.”

He hopes it will not be too long before the Government sees the light and raises salaries.

But it is not just about the money. Teaching, especially younger children, is widely seen as women’s work.

“Education is also competing with professions like the military and police,” said Dr Robert Thompson, the academic dean at ECAE.

“We have to think of different ways of attracting men by introducing a counselling programme for them early on in school.”

Even in their degrees the students needed inspiration, Dr Thompson said. Classroom training helps but there should also be fun activities, such as sport.

With six men and 144 women currently training, the ECAE is working with the Abu Dhabi Education Council to encourage boys into careers in education.

“Our approach to training the students is different from a university because it’s more [focused] on field studies, with them in continuous contact with schoolkids and teachers already in schools,” said Professor Jim Mienczakowski, the vice chancellor of the college.

With the country dependent on expatriate teachers, there was an urgent need for local talent, Prof Mienczakowski said.

“There is a need for role models to work with the young children, to make them value education and value the goals and culture of the country while learning at international standards,” he said.

Increasing the number of Emirati teachers would help pupils, especially boys, who score far worse than those in other countries on international tests.

Aziz AbdulRab, another student teacher, believes his example will lead others to follow suit.

“I aim to bring new teacher strategies and improve the Arabic and English language of pupils in school and raise the importance of a teacher job in the country,” Mr AbdulRab said.