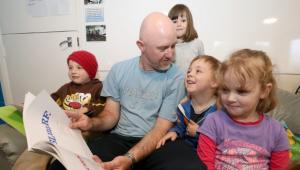 An early childcare researcher is calling on the Government to do more to address a lack of men in pre-school teaching.

Sarah Alexander, of research organisation ChildForum, met Ministry of Education staff last week to discuss the gender gap in early childhood education (ECE), which she says could be improved with political support.

“We are kind of at a crossroads now, where if we continue to do nothing, nothing will ever happen. Now is the time to do it.”

Two per cent of the teaching staff in kindergartens, childcare centres and working as coordinators of home-based ECE are male.

She wanted to see the Government introduce policy that would help encourage men into the workforce.

Children under 5 were forming their identities and learning about gender stereotypes, and a more diverse sector would show them their roles didn’t have to be confined by gender, she said.

Andrew Willans​ is a teacher at Pauatahanui Preschool, near Porirua. He was a stay-at-home dad for 11 years, spending time as a playcentre parent, and working with the local Plunket committee.

When he got the job almost a year ago, he was the first male to be interviewed by the preschool’s head teacher Chris Nolan in her 18 years with the centre.

Nolan said having a man at the preschool meant children could see men and women working together side by side. “We need more male role models in the sector.”

Parents had given a lot of favourable feedback on Willans’ teaching, and kids were clearly fond of him, greeting him like “Dad coming home from work” when he got to work.

The low pay that came with the job was a barrier, Willans said, especially if men were treated as the main breadwinner.

The Ministry of Education’s Lisa Rodgers, deputy secretary early learning and student achievement, said the ministry was focused on raising the quality of ECE through a range of strategies, and prioritised the quality of teaching rather than the gender of teachers.

The ministry was aware of a the gender disparity in the sector.

“It has been confirmed by the Human Rights Commission that we cannot discriminate through affirmative action or by providing scholarships on the basis of gender, because men are not a disadvantaged group.”

The proportion of male teachers in ECE in New Zealand was close to the average for OECD countries in 2014.