on April 8th, 2017 Posted By BG in World News
by Koren Allpress - Stuff.co.nz 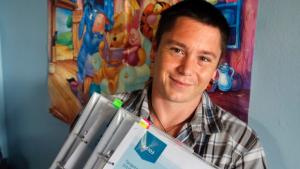 Two South Canterbury men who are studying to become early childhood education (ECE) teachers could double the number of males teaching in the region once qualified.

As of June 2014, there were just two licensed male ECE teachers employed in South Canterbury, of a total of 251 teachers in the region, according to data released by the Ministry of Education.

But former forestry worker Ben Harris, 42, and former insulation worker Michael Tough, 30, are hoping to buck the trend and encourage other men to consider obtaining qualifications in ECE.

“A lot of males are just scared to get into the industry,” Michael Tough said.

Having known for a long time he wanted to get into ECE, Tough said he felt he had to wait for there to be less of a stigma around males in the industry before he made the move.

Tough said there were a lot of children who didn’t have a father figure in their lives and he hoped as an educator he might be able to help fill that void.

Ben Harris first got involved with the Geraldine Kindergarten when his son was enrolled at the centre about five years ago.

“I found myself spending quite a bit of time at kindy hanging out with my son and other kids … the teachers talked me into following it up from there,” Harris said.

The number of men involved in ECE was growing slowly, “but there’s still a real shortage”, he said.

Harris would like to see the ministry do more to increase the number of male teachers and those of different ethnicities.

Ministry of Education deputy secretary for evidence, data and knowledge Craig Jones said the data, from June 2014, was the most current available.

Those numbers excluded parent-led services including as playcentres, kohanga reo, playgroups and other services, Jones said.

“There would be definitely a shortage,” Hawkey said.

The lack of male teachers was not having an effect on the education provided by ECE, but could be impacting on the social side of a child’s education, he said.

“They’re not missing out on any pertinent teaching or learning, but I guess males provide a different perspective and they have a different manner about them often.”

The way they went about involving themselves in activities had a different “slant” to women, he said.

Hawkey was unsure what could be done to increase numbers.

“The ministry and various people have undertaken a lot in the past and it perhaps hasn’t really resulted in any significant increase.”

He believed salary could be an issue, as working as a teacher in the field required a Bachelor degree.

He also believed people were not as aware, as they could be, of how beneficial a male teacher can be.

“Promote that it has a positive influence on children and children’s lives, people would then see that it is of real value,” Hawkey said.

Temuka Karaka Learning Centre manager Fiona Frew said there was a shortage of male teachers “all over New Zealand”.

“It probably has something to do with history in New Zealand and male teachers and the way that they’re perceived by some people.”

Frew believed all children should have a positive male role model in their lives, and for some children that could just be at an ECE centre.

South Canterbury Playcentre Association president Elle Mitchell said playcentres did not hire staff, as they were a parent lead initiative. However, she said men definitely played a role in helping out.

While the number of women at South Canterbury’s four centres, “on any given day”, was higher than the number of men, dads and grandads continued to have a presence.

“We embrace all of the whanau to be a part of the playcentres.”

Men also often helped behind the scenes with things like maintenance, she said.