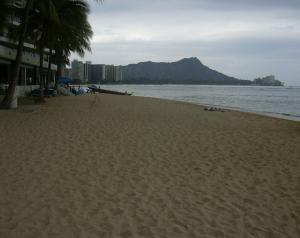 Here are two of the photos from the 2008 Working Forum Men in Early Childhood Education. As we secure additional photos we’ll post them. Included is Wakiki Beach, site of the conference hotel and the last gathering at the closing ceremony with the Leadership Team on stage.

The conference was held at a hotel on the famous Wakiki Beach – in Honolulu, Hawaii – for those movie buffs, that’s the place a movie with Elvis Presley was filmed – but – no there were no sightings of him! After the conference was over, a group of us played a great game of ultimate frizbee – US, New Zealanders, UK and Aussies – I’d have to say that the Aussies sure do know how to play rugby! It was great to be playing with all these men who are working with young children – they REALLY know how to have fun!