on July 19th, 2017 Posted By BG in World News
by Stefanie Balogh - The Australian 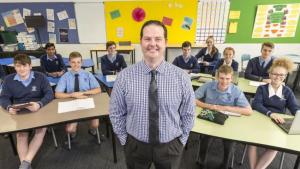 A targeted and specific recruitment drive is needed to attract more men into the nation’s classrooms to arrest a male teacher drought, a new report finds.

The first study of its kind to ask serving teachers why they chose the profession reveals the main driving factor for all teachers is the intrinsic value of teaching, ­followed by teaching ability, and a desire to shape the future of young lives.

But male teachers were more likely than their female colleagues to be drawn to the profession to teach a subject they have a strong interest in, as well as leadership ­opportunities.

The report by the Learning Science­s Institute Australia at the Australian Catholic University, commissioned by the Queensland College of Teachers, busts the myth that people go into teaching as a “fallback career’’.

It finds the greatest influencers on people choosing teaching are not career counsellors but teachers themselves, followed by family and friends.

QCT director John Ryan said the report revealed 40 per cent of teachers decided on that career path while they were still at school and teachers needed to understand the “vital ambassadorial role they have in attracting the next generation of teachers to the profession’’. The recommendations include identifying aspiring teachers while they are at high school and fostering their ambitions.

Heath Stewart always knew he wanted to teach but entered the profession 2½ years ago as a ­second career.

“I probably would have put it at the top of my pile at the end of high school, but you’ve got competing interests there. I made my way back in the end,’’ the 36-year-old said.

Mr Stewart, a father of twin boys who teaches history and business at Brisbane’s Prince of Peace Lutheran College, said he always enjoyed the thought of working with kids.

“I get a real thrill out of seeing them achieve great results, when they exceed their own expectations,” he said.

“It doesn’t have to be the high-flyers. It can be the students who never saw themselves passing, but (who) you’ve spent the extra time with and really coached them to get them over the line and see that value in themselves as well. I enjoy that — I get a kick out of that.’’

LSIA director Claire Wyatt-Smith said the findings from 1165 teachers could help improve recruit­ment practices at a “time when student numbers are expected to rise and a teacher shortage is anticipated’’.

Federal and state governments are grappling with workforce planning and a looming teacher drought. By 2022, student numbers are expected to increase by 25 per cent; the past five years has seen the number of teachers ­increase at about 1 per cent a year.

Nationally, one in four teachers is male and the ratio has decreased steadily for three decades. “This report reveals the need for a very targeted and differentiated approach­ to successfully attract more men to the teaching profession,’’ Professor Wyatt-Smith said. “A higher proportion of male teachers also have greater career advancement and leadership aspir­ations than female teachers and view teaching as a step toward­s gaining leadership roles.

“Career pathways need to be developed and promoted to attract more men into teaching.’’