on May 27th, 2014 Posted By BG in World News
By Elizabeth Williams - Trinidad 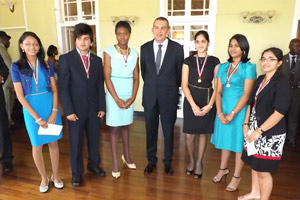 President Anthony Carmona is again calling for more male teachers in classrooms throughout the country.

He pleaded for the authorities in the education system to address the matter yesterday. His words came during the ceremony for President’s Medals for achievers in Education at President’s House in Tobago.

It was revealed 72 per cent of teachers are female. This was also confirmed by Education Minister Dr Tim Gopeesingh.

“In this regard I seek the indulgence of the Secretary, the Chief Secretary and Dr Gopeesingh, maybe collaborating and having a type of affirmative action to bring more men into the classroom,” President Carmona said.

Six students, five of whom were girls, received medals from the President.

Carmona, during his address, called for men to be taught proper values of respect. “We need more men in the classroom and we need not simply throw our hands in the air, but go to our learning institutions and confront them as we say in the country, ‘manos to manos’, and bring them on board to become teachers throughout our teaching institutions,” he said.

He commended parents for being part of their children’s lives, and called for pupils to be respectable members of society. “Do not become yes men and women in our society, stand up for what is right. Live a life of impeccable integrity. Yes, you will stumble but get back up on that race of life and continue to do so from a position of righteousness and social consciousness.”

Asked to comment on the matter, following the President’s address, Gopeesingh said the Ministry of Education is looking towards addressing the matter, of the imbalance of female to male teachers in the educational system. “Seventy-two per cent of the teachers are female, 28 per cent male and so the male model figure within the school system is deficient at the moment. Combine that with the absence of a number of fathers from the societal perspective that combination goes against the natural development of young boys into adulthood. Based on the consultations we have been having, we looked towards what solutions we can achieve,” Gopeesingh said.

“Unfortunately they seem not to want to cooperate with the Ministry of Education as much as they should be cooperating and when they meet twice a month, they cannot take care of the 16,000 teacher issues, and that is just one perspective. Those within the schools themselves, the male teachers, I want to thank them for the tremendous job they are doing but from a national perspective we need much more male factor parenting present. We need the community support, the church support, we need the NGO’s the CBO’s.”

Gopeesingh said he has ensured there are proper school-based management teams now implemented in all schools and at the government secondary school there is now the appointment of local school boards.

“The deficiency is reflective at the university level where more than 60-70 per cent of the graduates are female. But at the CAPE level the boys catch up with the girls.”