on July 6th, 2021 Posted By BG in World News
by Matthew Raggatt - The Canberra News 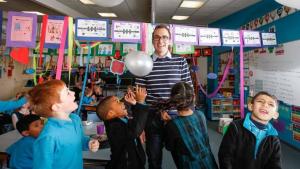 He can dance, he can sing and he is one of the men breaking the trend of female-led classes at one Canberra primary school.

Mathew McRae is one of five male teachers at Hughes Primary School, with three of the four kindergarten and grade one classes now having a man at the helm.

Last year, Brian the janitor was the only man on campus.

Fresh from being named the ACT public schools’ New Educator of the Year on Friday night, Mr McRae will lead his team of grades 4 to 6 boys in Thursday night’s Dance Nation Schools Spectacular at the Royal Theatre.

It is the kind of extra commitment by the 25-year-old grade one teacher that has won him admirers among staff and parents, including the school’s principal Kate Smith.

“He has exemplary practice, he’s a highly intelligent person and the way he passes on that emotional intelligence to the children is exemplary. In my 26 years of teaching I’ve never seen a teacher like Mat,” Ms Smith said.

“Staff and parents adore him … he is an absolute future principal for the system.”

Ms Smith brought Mr McRae with her from Charnwood-Dunlop Primary School and said it was nice to have a little more gender balance, with this year’s male numbers in early year classes unique.

“This is my 26th year, and I’ve never been at a school where there’s been a male involved in early childhood classes [kindergarten to grade 2],” she said.

Men make up about 20 per cent of Hughes Primary School’s teaching staff, and 23 per cent of teacher numbers across all public ACT primary and secondary schools.

”Having at least two years with a male teacher in the course of primary school is ideal for boys to see that learning was something that men do, and for girls to experience caring men in these roles,” Biddulph said.

The popular writer – voted Australia’s Father of the Year in 2000 – said many men still found a “kind of glass wall” to entering early childhood work but they were highly sought after by schools who wanted a more gender-balanced staff.

For Mathew McRae – who spends two weeks of his holidays each year as a companion for children with cancer at Camp Quality – there has never been any doubt about his choice of career.

“I don’t know what other people do. I’ve always wanted to be a teacher since I was a young kid, and I guess I put my heart and soul into it – and do everything I can to help those kids enrich their lives academically and socially,” Mr McRae said.

“It’s sort of like the reward I get from the job is seeing them succeed – whether it’s something from understanding a sound, or performing, or receiving an award for neat handwriting.

”And I just love that, it makes me feel very good – I feel really privileged to be working with them each day. I think I’m so lucky.”