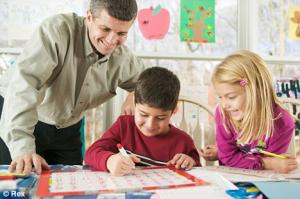 A major new drive to recruit more male staff to primary schools was launched today as it emerged just one in eight teachers is a man.

New figures show the number of male school teachers is running at a historic low of 13 per cent in primaries and 41 per cent in secondaries.
Teacher

More than a quarter of primary schools do not have a single male teacher, with nearly 5,000 staffrooms populated solely by women.

Despite a recent rise in the number of men applying to train as primary teachers, thought to be linked to the recession, four in five candidates are still women.

A fresh recruitment drive will see primary schools stage special events where staff will invite men in to discuss teaching and persuade them they have a future in the profession.

The campaign aims to capitalise on apparent renewed interest in primary teaching as a career.

Inquiries by men about primary teaching have risen 30 per cent in the past year while men now account for one in five applications for training courses.

The numbers being accepted onto courses has leapt from 15 per cent to 18 per cent in a year.

The Training and Development Agency for Schools, the Government’s teacher training quango, said the campaign was not intended to be anti-women.

But research by the body had shown that boys were more likely to approach male teachers to report bullying or problems at home.

Male primary teachers had acted as fundamental role models to half of men, it said.

Graham Holley, chief executive, said: ‘Whenever I talk about the need to get more men into primaries, the unions say I’m being anti-women, but it’s not that.

‘Everyone is trained to handle boys and girls in the classroom and it does not affect attainment.

‘But education is about more than just academic achievement; it is about preparation for adulthood, and there is a need for a mix of role models in primary classrooms.

‘If we are not attracting men, we are under-exploiting our pool of potential teachers.’

Millbank Primary School in central London is hoping to attract 100 men to its event tonight.

The school has 24 teachers with just four men.

‘Thirty or 40 years ago it was seen as a job that women did because it fitted in with their children,’ she said.

‘We want it to be seen as a serious profession out of which men and women can expect to make a long career.

‘Schools should represent what is out there in the world.

‘That is what works best for kids, what they need and thrive on.

Stats have already shown that no men under the age of 25 work in state-run nurseries and there only a few dozen over-25s.

Ofsted inspectors have called on schools to provide father figures for working-class boys who lack them at home.

They said boys should ensure that boys ‘good male role models’ because too many are growing up with poor attitudes to adults, especially women teachers.

A survey commissioned by the Children’s Workforce Development Council has found that many parents believe that male teachers give boys someone to look up to.

Single mothers are particularly keen to see more male teachers because they wish their children to have more contact with men in caring roles, it found.

A sixth of single mums said their children spend less than two hours a week with a male role model such as a father figure, teacher or relative.

Mr Holley added: ‘It is vital that the classroom reflects the wider world outside.

‘Currently, men are drastically under-represented in primary schools and this is a situation we are very keen to change.

A well balanced, diverse workforce is of huge benefit to children and their development.’