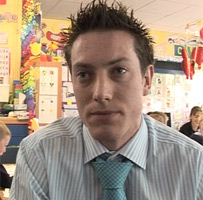 More than a quarter of primary schools in England don’t have a single male teacher.

There are worries this could have a negative impact on many children.

However, one school in Kidderminster is bucking the trend with five male teachers among its staff of 33.

Should there be more male primary teachers?

It also has a stream of men working at the school as part of their training to become a primary school teacher.

Matthew Wilson’s one of them. He told Newsbeat: “It’s often seen as a feminine profession, particularly from other males who haven’t actually come and worked in a school.

“But the children love having you around – it’s almost a novelty factor for them.”

He’s been working with Year One at the school for the past five weeks and says he loves the challenge.

But he thinks some men are put off going into primary school teaching because they’re worried people might question whether they have sinister motives.

He said: “From the outside world, wanting to come into school and spend 30 hours a week working with five and six-year-olds – a lot of people think that’s a little bit strange.”

Gareth Pritchard works at the school too.

He told Newsbeat: “The children will come up to you and try and hug you and hold your hand.

“On my first day I had to help with swimming lessons and I was confronted by 12 five-year-old boys and I had to help them get dressed and I felt a bit weird, a bit daunted.”

Experts are worried about the impact the shortage is having. Studies show male teachers play an important role in building confidence, enforcing discipline and as someone to look up to.

Sue’s daughter is in Year Four. She said: “It is important for boys and girls who don’t have a male and female role model at home.

“Also when they get to secondary school they’re going to be with more male teachers, so it gives them more confidence if they’re already used to them.”

Men only account for a small percentage of primary school teachers: in England it is 15%, in Wales it is a little higher at 19% and in Scotland it is just 8%.

Education authorities in the UK have told Newsbeat they are committed to getting male teachers into primary schools.

A spokesperson for the Training and Development Agency for Schools said: “Both male and female authority figures play an important role in the development of children, and we want the teaching workforce to reflect the strengths of our diverse society.”

For pupils in the Kidderminster school having men as well as women teachers has its perks.

William is in Year Four. He said: “What I like about male teachers is that they’re not that strict.”

Katie is also in his class and she thinks it’s good having men and women at school.

“I’ve got lots of friends who are boys and they always say, ‘I like having male teachers because we’re men and we like having them because they’re like us’,” she said.

There are strict checks in place for anyone who wants to work with children.

Authorities say the number of men applying to be primary school teachers is beginning to rise.

Gareth says men shouldn’t be put off: “There are things you can do.

“I’ve always got the door open when I’m teaching, I always make sure there are other adults around.

“If you’re passionate about it – just go for it.”