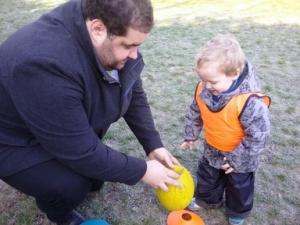 Hailed as a ‘true inspiration’, he can often be found dressing up in the role play area at West Downs Day Nursery (Winchester), much to the children’s delight.

“No two days are the same and that’s the way I like it,” he said. “The more I worked in nurseries when I was younger the more I enjoyed it.”

With a passion for go karting, which took him country wide for competitions, Mr Meekings gained a degree in Motorsport Engineering and even had experience with the McLaren Formula 1 team before deciding on a career in childcare and education.

Mr Meekings is one of two men working at Winchester setting and is referred to as ‘something of a rarity’. Despite recruitment drives, just two per cent of nursery teachers are men, a figure that has remained the same for the past decade.

The subject of much curiosity

But since entering the profession 12 years ago, his choice of job has been the subject of much curiosity – and has even been quizzed about his sexuality by former colleagues.

He revealed: “I don’t get defensive – that’s definitely not me – because you can’t break down stereotypes or change perceptions if people don’t talk to you or voice their concerns.

“I am asking parents to trust me with the care of their child. Talking about my background and why I chose to work in early years is a very small ‘ask’ if it helps build trust and confidence.”

‘We don’t stand still in nursery’

Where others might see a conflict between some of the roles, Mr Meekings sees connectivity and consistency.

“Being involved in so many aspects of nursery and company life gives me a deeper connection with all my colleagues,” he said, “and by regularly taking sessions as a practitioner I remain focused on the reason why we are here.

“We don’t stand still in nursery or in the company as a whole and are constantly looking to improve our provision still further. That means listening to everyone and making sure they have all the information they need to make informed decisions.”

Rugby is a passion in and out of nursery as Mr Meekings currently plays ‘tight head prop’ for Alresford RFC First Team. He has recently introduced the non-contact mini version of the sport in two Childbase Partnership nurseries.

Trained experts from the national Rugby Tots organisation come to the nursery’s twice weekly sessions to provide fun activities for small groups of children aged between two and five years.

He said: “Children love physical activity that has structure, teamwork and, above all, is a lot of fun. Mini rugby provides that as they navigate obstacle courses while passing the ball and then placing it for a try. Even staff join in. It is a ‘win-win’ activity because we are all having fun while exercising and there is no better way to reinforce our messages about the importance of exercise to health.”

For Mr Meekings, his role as an early years educator is not about imposing structure and forcing learning; it’s about encouraging children to explore, investigate, question and contribute in a process that not only builds self-esteem but one which helps him identify particular interests and talents.

“You can arrive in nursery in the morning with a plan and lots of ideas but a child will take you where they want to go. You have to embrace the opportunity and the shared experience it offers; we are researching something together and both learning.

“And the rewards? You are there for the ‘light bulb moments’ like witnessing a child’s wonder at discovery or their triumph following the achievement of a personal goal they have been pursuing for a long time. Our imagination is the only limit to what children can learn at this time. We are here to help shape the future and tomorrow’s leaders. It is very hard to beat that in terms of job satisfaction.”

Childbase Partnership is a UK provider of childcare and early years education, with 41 day nurseries throughout the South of England providing nearly 6,000 children aged between six weeks to five years with care and opportunities.