on September 18th, 2012 Posted By BG in World News
by Afshan Ahmed - The National 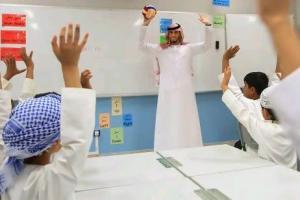 As children excitedly dragging their trolley bags towards their new classrooms at the Al Aasimah School today there was an adult experiencing a similar rush of emotions.

In his crisp white kandura, Ahmed Al Maamari stood out from the group of 62 teachers who welcomed pupils at the government school in the Al Shamkha area of the capital. The cycle two school teaches children between the ages of six and 12.

Mr Al Maamari is among a handful of Emirati men joining government schools this year.

“It is hard to express how excited I am today,” he said. “I got to school at 7am so that I was ready for the children.

“This is the first time I feel really responsible because I will be teaching young children.

“My colleagues say I am lucky because I am bilingual and they [the children] will be more comfortable with me.”

The 24-year-old graduated from the Emirates College for Advanced Education earlier this year. He and his five male classmates – the first men on any federal university teaching course in three years – have all been placed in Abu Dhabi Education Council (Adec) schools.

Emirati men are scarce in government schools. Last year they accounted for just 600 of Adec’s 9,000 teachers.

Men tend to shun the profession because of its low status, poor salary and long work hours, forcing the government to rely on expatriates to fill the gaps.

Even for Mr Al Maamari, the decision to go into teaching was not easy. “It was by chance I saw an ad for the programme and thought of trying out,” he said. “I was still undecided after joining the course but when I visited a school for the first time during my training, that’s when I knew I wanted to do this.”

He has spent weeks preparing for yesterday. “I came yesterday afternoon to set up the classroom,” he said as he walked into his classroom, which was adorned with flags and posters.

He greeted the 10 third-grade boys with a broad smile, then set up his laptop and took the register before walking up to the board and writing his name.

“What is my name?” he asked, and the boys answered, giggling. He tossed a ball at them and continued his introduction.

“I want to see if they can construct complete sentences to understand what level they are at.

“I was shocked to see one child write his name in English, but from right to left.”

When Mohammed Ammash, 9, struggled to keep up, the teacher immediately switched to addressing the class in Arabic.

“I like my teacher,” said Mohammed. “He knows my name and is always smiling.”

The low first-day attendance gave him a chance to acquaint the children with school life, he said.

“The first week is all about knowing them,” said Mr Al Maamari. “I have lots of ideas to maintain discipline, like a points system. Pupils who earn 50 or more points will be rewarded.

“I also have to understand their strengths and weaknesses so that I can teach them accordingly.”

Heruy Kiros, head of faculty at the schools, said Mr Al Maamari was “brimming with ideas”.

He added that “unlike other new teachers, who are intimidated in group session and do not talk much, he loves to share them”.

Ahmed Ahharithi, the school principal, was also Mr Al Maamari’s high school teacher. He is thrilled to have an enthusiastic Emirati onboard.

“He was here the entire weekend helping prepare for the new year,” said Mr Ahharithi. “He is also very ambitious and has contributed so much. He is doing very well.”

Mr Ahharithi believes men like Mr Maamari have started raising the profile of the profession. “His motivation and drive can encourage others into teaching.”

Mr Al Maamari said it was essential to get more Emirati men into the classroom. “What we can bring to the table, because we are Emirati, is our culture,” he said. “I can understand the children, even their different accents.

“Especially children who are slow learners. I can explain science and mathematics in Arabic and by relating them to Emirati culture and things in their daily life.”