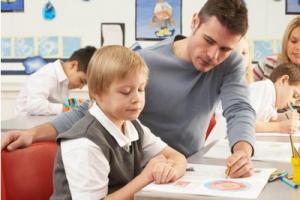 In contrast, the numbers trained in England have risen from 18% two years ago to 20% this year.

The decline in Scotland comes amid continuing concerns that there are not enough men entering the primary teaching workforce.

Experts acknowledge increasing the number of male teachers would help give pupils a more balanced education.

It is seen as especially important for children growing up in single-parent families who may never come into regular contact with a male role model until they reach secondary school.

Part of the reason for low levels of interest among males is believed to be the traditional alignment of primary teaching with the care and welfare of young people which brings it closer to professions traditionally populated by females such as nursing and social care.

A spokesman for the Educational Institute of Scotland (EIS), said efforts should be made to increase the number of male teachers being trained.

“Recruiting sufficient numbers of male teachers in primary and early years settings is extremely important, in order to provide an appropriate balance in the classroom,” he said.

“It is helpful for young children to be taught by teachers from different backgrounds, including both male and female teachers, so that they can learn from different role models and learn that gender is no barrier to any type of role in life.”

Eileen Prior, executive director of the Scottish Parent Teacher Council, said more should be done to encourage men into the profession.

She added: “Parents generally tell us they are keen to see a better gender balance in schools. Particularly in primary schools, it is felt boys would benefit from having male role models in the classroom.

“Unfortunately, the reality is that men in primary teaching tend to move quickly into management roles rather than staying in classroom teaching.

“There will be many reasons for this, but the growing awareness of the importance of early education will hopefully help to make primary school teaching a more valued professional choice for men and women.”

Professor Bob Davis, head of the School of Education at Glasgow University, acknowledged the imbalance, but said the impact was often overstated.

“We would support the position that there should be a more balanced gender profile within the profession and it is a good thing that men and women should be more fairly and equally represented,” he said.

“However, many of the arguments raised in favour of bringing more men into teaching do not bear much inspection.

“Increasing the number of males would provide more male role models, but there is very scanty evidence that the gender of a teacher has much salience with pupils at all.

“Although the gender of a teacher is a factor in pupils’ perceptions, it is dwarfed by other considerations such as whether they are effective teachers, and there is also little evidence that underperforming or disaffected boys respond better to male teachers.”

A Scottish Government spokeswoman said: “The percentage of male trainee teachers in Scottish schools has remained broadly consistent since 2007.

“The Scottish Government is focused on ensuring we recruit the best teachers to the profession and that our teachers receive the ongoing training they need to be able to effectively teach and inspire all of their pupils.”