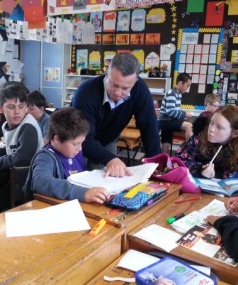 The Ministry of Education appears at a loss as to how to resolve the chronic shortage of male teachers, a challenge hampered by both red flags and red tape.

Despite a public relations offensive from the ministry, the number of male teachers in both primary and secondary schools has continued to drop during the past 10 years.

In 2013, men made up only 16.5 per cent of primary school teachers and 41.2 per cent at secondary schools. The figures are even more severe at preschools, where males make up just 2 per cent of teaching staff.

The ministry is aware of the gender disparity and wants to resolve it, but the only apparent method to date has been featuring males prominently in recruitment campaigns.

The failure of marketing to entice young men to the sector, and with little hope of a major change in that trend, is evident in reader reaction to the issue on stuff.co.nz, where comments frequently touch on the stigma of male teachers, particularly that created around childcare worker Peter Ellis. More than 20 years on, the molestation case remains a touchstone.

The other obvious mechanism – incentives – are absurdly a big no-no. The Human Rights Commission has ruled male-only scholarships are unlawful. These are available only for women, disabled people and those from varying ethnic backgrounds.

Even though they appear to be endangered species at school, there is nothing “minority” about white Kiwi men when it comes to the commission.

Former Secondary Principals’ Association president Patrick Walsh said new data showed many children could get to secondary school without having a male role model in their lives, because of growing numbers from single-parent households.

One male teacher, 14-year classroom veteran Stephen Baker, said that greater balance between male and female teachers was desirable because, just as boys and girls learn differently, men and women have difference approaches to teaching.

Unfortunately, not enough young men are prepared to see themselves in this role, and without improved teacher training support and more apparent career pathways, fewer and fewer will be enticed.

The Ministry of Education needs to start thinking outside the box, and the Human Rights Commission needs to wake up to the realities of 21st century classrooms.