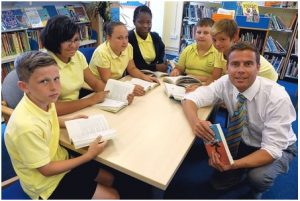 Schoolchildren in Crawley could be growing up with a lack of male role models in their lives.

Less than a quarter of teachers in town are male and four Crawley schools have no male teachers whatsoever.

An independent report has said that, nationally, many children are in “man deserts” with one in four state primary schools having no full-time qualified male teacher. One male Crawley teacher, however, has sung the praises of his profession and hopes to encourage more men into teaching.

Euan Hanington (pictured above), who is assistant head of Southgate Primary School, has been teaching for 16 years.

When his career kicked off he was working in a very different field.

He said: “I was working for Greater London Radio as a football reporter, doing match reports and radio transmissions.

“Once I shared a urinal with George Best! I had been covering an Arsenal match at Highbury, their old stadium, and we’d both been in the press suite.

“My friends think I am nuts to have given up my press pass.”

Mr Hanington went travelling to Japan in 1994 and for some extra cash began teaching English in Tokyo.

He said: “I really liked it and enjoyed teaching the kids. I got a real sense of job satisfaction and a different kind of buzz to the one I’d got as a football reporter.”

Back in England he got his first job as a teacher in Peacehaven.

But he found it difficult to make ends meet so returned to teach in Tokyo, where he got involved with school plays – even writing a production called Charlie and the Sushi Factory.

Mr Hanington recalled: “I could be teaching in the classroom in Tokyo at 3.30pm on Friday, get on a bullet train and be snowboarding in the mountains at 6pm.”

Missing home, he returned to the UK in 2005 and joined a school in North Lancing, before heading to Southgate Primary in 2011.

Mr Hanington believes few men go into teaching because of the many higher paid jobs in the private sector.

He said: “Students are leaving university with huge amounts of debt and their priority is to pay off that debt.”

He feels teaching is held in higher regard in many other countries and so teachers’ pay better reflects their hard work.

“But children are so fun to teach. They have such a sense of humour. They make me want to get up at 5.30am.

“No job is more important than teaching, and it is important for boys – and girls – to have male role models.”

HOW MANY MALE TEACHERS DOES YOUR SCHOOL HAVE?