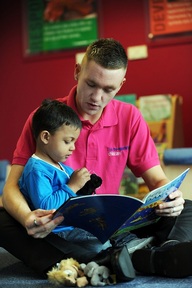 It is planning to lead the way in eradicating gender stereotypes about childcare practitioners by promising to increase its own male workforce to 10 per cent, which is well above the national average.

Mike Abbott, general group manager at The Co-operative Childcare, said: “Gender stereotypes in childcare are holding some men back from what could be the perfect career path for them where they can positively influence our next generation. Children need to be around both male and female adults to develop their core skills, become well rounded young people and continue to flourish.

“We are determined to make a marked difference to the male to female ratio in our nurseries by leading the way in challenging these preconceptions that are damaging the industry and championing that ‘real men’ really do work in childcare.”

The ‘Real Men Work in Childcare’ campaign aims to change misguided perceptions about men in the industry.

Studies have shown children benefit from having a male role model in their early years at nursery. They have also revealed that negative perceptions around men who chose to work in the profession still exist and put off prospective nursery workers.

The Co-operative Childcare will partner with job centres and recruitment agencies to explain the benefits of being a practitioner and will be visiting colleges and schools to educate young people making their career choices.

The Co-operative Childcare is also offering apprenticeships and support in funding qualifications for its practitioners to help further their careers in the industry.

The ‘Real Men Work in Childcare’ campaign is being promoted by an animation featuring four male characters in ‘manly’ jobs – a builder, driver, retail assistant and tree surgeon – keen to better use their skills in a nursery to help develop young people. The animated characters are designed to break down the perceived barriers to working in the industry to encourage a more balanced nursery dynamic.