on September 12th, 2010 Posted By BG in World News
by Jane Hansen - The Daily Telegraph - UK 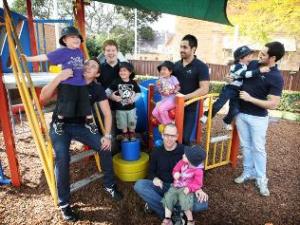 These young men are pioneers in child care, one of the few professions dominated by women.

They have broken down the gender barrier, daily proving their proficiency in looking after children as young as two.

They say they have one of the best jobs in the world, and parents at the centre are overwhelmingly happy.

But, sadly, there have been occasional whispers and raised eyebrows – evidence there are stereotypes still to be overcome.

“There are people who just assume you’re a child molester. I can’t blame people for being suspicious, but I dispel it by being warm and open with parents,” Tom Isaacs, 24, said.

Only four per cent of the nation’s 85,000 childcare workers are males. But at the Top Ryde Early Learning Centre, where Mr Isaacs works, there are five men – two of whom are aspiring professional rugby league players – making up almost a third of staff, caring for 59 children.

But breaking down the perception that a man interested in looking after young children must be suspect remains tough.

At a previous centre, Matthew Hochstetter, 25, was confronted with unfounded suspicion.

“What are males doing here? They must be paedophiles – that’s the stereotype – and it’s disheartening when you put your heart and soul into the job,” Mr Hochstetter said.

Their childcare centre has been forced to address the issue.

As a precaution, the men do not change nappies. And, as with all childcare workers at the centre, they must always be within sight of one another.

“Parents are more likely to be suspicious of men, so we’ve just swapped the chores,” owner Nesha O’Neil said.

“We’ve always had a philosophy to employ men, and actively recruit them. They bring a really good balance to the program.”

For decades, it has been seen as “women’s work”, with low pay and the low status of childcare workers a big deterrent for men.

“Being outside, running around, playing ball games: that’s the best bit,” early childhood teacher Bryn Williams, 34, said. “I’ve been in child care for nine years, and this is the first time I’ve not been the only bloke.”

Mr Hochstetter agrees the male dynamic moves play away from craft and ABCs to active games,, which provides a good balance.

“It’s very rewarding to watch them grow, and help them develop … it’s my passion,” he said.

Rochelle Ternel, 32, a single mum of four-year-old Koby, said she chose the centre because it had male workers as role models.