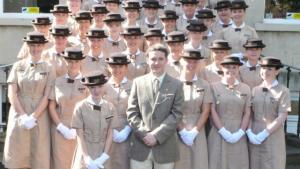 Norland College, an English school famous for producing the country’s finest and most professional nannies, has opened its doors to its first fully matriculated (and second-ever) male student in the campus’ 120-year history. Michael Kenny, 18, will join a class of 48 females at Norland, where he will study to become the first male to complete the education degree course. Here’s what you should know about the aspiring “manny” and the traditions of Norland:

Does England really have a nanny college?
Yes. Norland College was founded in Bath more than a century ago as a training school for ladies aspiring to be children’s nurses. Today, students at Norland study for an academic child-care qualification and also gain hands-on experience with children through a variety of internships with families or residencies at schools. Norland is known for its “distinctive, ROTC-esque uniform,” which consists of a cream dress and a round brown hat emblazoned with an “N” that was instituted “so that nannies would be distinguishable in wealthy households from the ranks of other, more servile housekeepers,” says Doug Barry at Jezebel.

Why does Michael Kenny want to become a nanny?
Kenny says his time teaching English and math to disabled children in a Ugandan orphanage piqued his interest in education and child care. “I can understand young people a lot better. I find them easier to get on with,” Kenny told Britain’s Telegraph. He plans to nanny for a few years after graduation before moving on to work in a nursery school or prep school.

Has there been any backlash?
Very little. While Norland students have traditionally been female, the school has no official rules barring male students, and its first male attendee, Peter Cummins, graduated from the three-year diploma program in 2005. Still, Kenny says he has endured some teasing from his friends and found some people perplexed by his interest in the female-dominated profession. “I don’t think it should be thought of as unusual if a man wants to work in the child-care profession,” Kenny said in a statement to ABC News. “Men can bring a different dimension to child care, and I think it’s really important that even the youngest children have strong male role models.”

What’s the job market like for nannies?
Norland’s in-house nanny agency guarantees its students a job with steady pay straight out of school, and the Telegraph estimates that a fully qualified Norland nanny will earn about £26,800 a year as a live-in nanny, or around £34,500 a year living out. “We always have more job opportunities than we have students,” Norland College principal Liz Hunt told the Telegraph. “The demand certainly outstrips the supply.