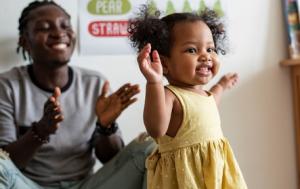 Recruitment remains one of the biggest challenges for the sector to solve, and a pressing issue is balancing the gender of the early years workforce, of which just four per cent are men.

Addressing the sector’s recruitment issues is important to ensure we have enough well qualified staff to keep the sector viable. An important part of resolving this involves resetting the gender balance, by encouraging more men to join the sector.

At the very core of this issue, is the lack of men who consider the sector as a viable route. Possibly the most causal factor of the gender disparity is the inherent notion that ‘childcare is a woman’s job’.

To address this, there needs to be a fundamental shift within society which emphasises the importance of early years educators, and highlights their role in children’s development.

Making career pathways clear is an important way to encourage men into the sector.

Jake Forecast wanted to work in education from a young age, and with the encouragement from one of the few male teachers at his school, decided to choose the CACHE Level 3 Early Years Educator (EYE) qualification as a route into teaching.

Jake believes that through challenging some of the stereotypes that the public have about men in childcare, the sector can start to equalise the gender balance in early years teaching, saying: “When I undertook work experience at school and during my EYE course, I never knew how much of an impact I’d make to the primary school and early years sectors by being a positive male role model. My CACHE qualification fuelled my passion for early years education and helped me secure a place at university. I’m now on route to realising my dream of becoming a Primary School Teacher.”

For young men looking at their career pathways into education, early years must be put forward as a viable option which can add significant value to their understanding of the early years.

To accelerate this process, men who already work within the sector should be given tools and resources to help them understand career development opportunities for themselves and to share with others. This includes careers toolkits which support learners embarking on the next stage of their education and signposts useful resources and helpful tips to raise career aspirations.

Alongside this, it is essential to emphasise the critical importance of early childhood education on a child’s development and life chances, and portray the crucial role early years educators play in supporting this.

Men looking to retrain should also targeted by recruiters

This should be communicated during the recruitment process, and as part of schools’ careers advice so students considering career paths at school age are given a clear understanding of where their career could progress to if they start in early years. It is also important those recruiting are targeting men looking to retrain.

Given the significant boost the government is putting behind the Lifetime Skills Guarantee and other re-training packages, learners and employers can benefit greatly.

We have seen efforts to make education more gender-balanced in other areas, including the excellent work bringing women into STEM. For the sake of the sector, the same level of importance needs to be placed on supporting men who want to enter the early years.