on September 16th, 2012 Posted By BG in World News
by Sean O’Driscoll - Dubai 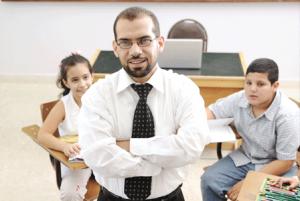 School’s back but without the boys – research reveals males are turning their backs on teaching.

While female teachers enjoy a high status, men complain they are mocked and told to get a ‘real job’.

The study has been published by researchers at Emirates College for Advanced Education in an effort to find out why there are so few male Emiratis in teaching.

The authors, Martina Dickson and Johann Le Roux, note that a lack of male teachers is a worldwide problem and point to recent research which suggests that it is “beneficial for young boys to have male role models in the classroom”.

They note one study which found that there should be “urgency” in recruiting more men into teaching because it reassures boys that learning is “an acceptable masculine activity”.

Researchers conducted in-depth interviews with six student teachers in Abu Dhabi and found that only two of the six had originally wanted to teach – the other four had chosen it because they didn’t get the grades to land their first-choice jobs.

One said he chose teaching because he wanted to do something productive straight away and didn’t want to wait around for months trying to find the original job he wanted.

The study follows concerns expressed earlier this year by members of the Federal National Council that there are not enough male Emirati teachers.

FNC member Mohammed Obaid Al Qutami – who raised the issue – said he believed Emirati men didn’t have the patience for teaching at local schools and advised that only 600 of the 9,000 Emiratis in teaching were male, with only five in the whole of Al Ain.

All six of the student teachers interviewed said they felt disrespected by friends, family and people they barely knew because they had chosen to train to become teachers.

One of the interviewees said he felt “dejected”as old school friends “belittled his career choice”. The researchers noted that many people around the world think teaching is a “caring, gentle” job suited to women.

While six case studies might not seem that many, the authors note that the figure will be about 10 per cent of the entire Abu Dhabi male Emirati teacher population when the six graduate from college. However, three of the men surveyed said that they wanted to switch careers after graduation.

Only one saw teaching as a noble profession.