on December 8th, 2010 Posted By BG in World News
VietNamNet 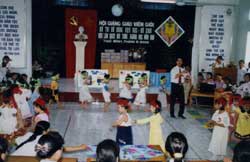 Hoan was one of two male students among thousands of females but his determination showed men can be kindergarten teachers too.

Hoan stands in front of the blackboard, clapping his hands to the song’s tune. Wide-eyed students sit on wooden chairs and sing along with him.

This morning’s lesson is about enhancing the sense of music in three-year-old children. The image of children learning about music is common at pre-schools, but finding a male teacher singing and playing with kids is quite out of the ordinary in Viet Nam.

Hoan is the only male kindergarten teacher in Thai Binh Province.

“It’s not easy to make a decision to pursue what is considered as an odd job,” Hoan says. “The traditional bias against male pre-school teachers caused me trouble the moment I set foot in the sector.”

After he graduated from high school, Hoan registered for the provincial Pre-school Teachers’ College simply because he was very good with children.

“Children in my village usually gathered at my house on weekends. I gave them snacks, played with them and told fairy tales,” he says.

Hoan says he had always believed he would be good at the job until he discovered there were only two males among thousands of students at his college.

“I was so shocked!” Hoan says. “I wondered what would happen after I graduated. I even thought about moving to another school.”

However, his determination and support from his family showed him what his passion really was. After four-years of teaching at the commune’s kindergarten, he was appointed as deputy director of the school at the age of 28.

“Traditionally, men are considered careless, clumsy and unable to take care of children. My success has proved this idea wrong,” Hoan says.

The teacher still remembers how strange it was when he first started out as a teacher in charge of 30 children.

“Some parents were surprised to see me welcome their kids and asked me if I was an apprentice. Some even looked at me with obvious doubt,” Hoan says.

“They were kind of right at that time. Most of the kids were so small they were unable to stay clean and feed themselves. I was dead busy at lunch time.”

“Even I wondered if Hoan could handle the job. I believed that a woman could do it better than any man because of their maternal instinct, but Hoan had his own way and he won them over easily,” says Pham Thi Tho, deputy director of the kindergarten. Tho says Hoan always makes toys during his free time and he has created a special curriculum that allows children to study and play at the same time.

“I feel fine about letting Hoan keep an eye on my kid. He knows exactly how to comfort the kids while teaching them to be good boys,” says Nguyen Thi Loi, mother of a four-year-old son.

Hoan has enjoyed a series of successes. His music lesson was given an award for excellence by the provincial Department of Education and Training in his first year on the job. One year later, he received first prize for creative teaching methods in maths in a competition held by the provincial department.

Hoan was the only man among 100 kindergarten teachers to receive the title of a ‘National Excellent Teacher’ in the 2005-06 academic year.

“Some of my male colleagues have changed their jobs, but I’m still here. I’m so lucky to know that my desire is my career,” Hoan says.

He says pre-school teaching has failed to attract males because of the low salaries and poor welfare benefits.

“Most of the children are from poor families and they cannot pay more than VND29,000 (US$1.5) per month in school fees. It means that a teacher only receives an average monthly salary of VND500,000 ($26), which is not enough to maintain their life,” Hoan says.

“A man is always the bread-winner, and life responsibilities may force them to quit teaching. I feel so lucky because I have support from family and friends, who understand and encourage me to keep my job,” he says.

Now Hoan is very happy with his wife and a one-year-old son. To Hoan, becoming a parent means even more passion for the educational sector and more love for children.

“Kindergarten is not only the place that helps parents take care of their children, but it plays an important role in a child’s early development. “What they experience or learn during their very early years builds their view of the world, and I will teach them until they don’t want me,” he says.