on September 11th, 2011 Posted By BG in World News
By Leah Strug - The Shields Gazette 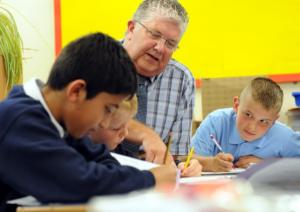 South Tyneside is bucking the trend when it comes to the number of male teachers in primary schools.

New figures released by the General Teaching Council for England (GTCE) show more than a quarter of schools in the country (27.2 per cent) have no male teacher.

But only eight of the borough’s 46 primary schools (17.4 per cent) have no men in their classrooms.

That 12.6 per cent ratio of male teachers is closer to the national figure, which stands at 12 per cent.

Teacher John Jeffrey, who works with Year 6 pupils at Laygate Community Primary School in South Shields, says a lot of men, like him, have got into schools later in their career, while female teachers tend to go into the profession straight from university.

Mr Jeffrey, a father-of-two, decided to go into teaching after he was made redundant from his job as a shipyard foreman, where he had discovered that he enjoyed passing on his knowledge to apprentices.

He said: “I prefer primary school teaching to secondary school because you get to teach a range of topics.

“Male members of staff tend to gravitate towards secondaries, or in primaries towards the top end of the school.

“My children are 16 and 11, and I have been teaching for 19 years, so most of the time I have been used to having a youngish family around me, which I think helps.

“A lot of male teachers find their vocation after doing something else first.”

Education Secretary Michael Gove said more male teachers are needed, but they can be put off by worries that teacher-pupil contact is a “legal minefield”. However, things are looking up, as the proportion of men entering the profession has risen slightly, with men now making up 25.6 per cent of newly qualified teachers, up from 24 per cent last year.

The schools in the borough without a male teacher are Biddick Hall Juniors, Monkton Infants and Lord Blyton, Marine Park and Sea View primaries in South Shields, East Boldon Infant, and Jarrow Cross C of E and St Joseph’s RC primaries in Jarrow.

GTCE chief executive Alan Meyrick said the figures “suggest little change in the long-term imbalance” between men and women in the profession.

According to Department for Education figures, 32 per cent of men working in nursery and primary schools are in senior management, compared with 16 per cent of women.