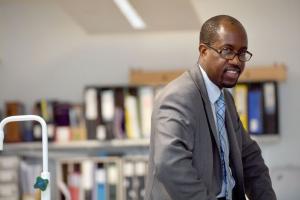 Four decades after getting its first black head teacher Wales is now thought to have none.

Figures from the Education Workforce Council show none of Wales’ 1,458 head teachers identify as black and just five are Asian, British Asian, or mixed race.

A further 26 did not want their ethnicity recorded and 299 are listed as “unknown” but the EWC, unions, and school leader organisations said they were unaware of any black head teachers in Wales.

High school physics teacher Daniel Wilson believes he is the only black teacher in Blaenau Gwent .

“For most of the kids in the valley the first black person they come across is me,” he said.

The Cardiff-born teacher said he had never experienced any racism during five years teaching at Ebbw Fawr Learning Community in Blaenau Gwent.

But the father of one believes there is still “unconscious cultural bias” in favour of white people four decades after Betty Campbell became Wales’ first black head teacher.

“What I love about teaching children is they see past the colour of your skin and see the person and you are just seen as a teacher.

“I have never experienced racism working in school here,” he said.

“But there are so few of us visible that whether you like it or not we are ambassadors for black people.”

Jamaican-born Mrs Edwards, 62, who worked at Penygelli School in Coedpoeth, Wrexham for 18 years, was taught by black women so had confidence teaching was a job she could do.

But she said “that might not have been the case if I had grown up in Wales”.

Cardiff University biochemistry graduate Mr Wilson, whose family left Cardiff for Ghana when he was one, returning when he was 12, agreed.

“In Ghana my role models were black male teachers. When I came back in 1983 I had no idea that being black might make things impossible.”

After working as a medical rep Mr Wilson, 47, trained as a teacher at Glyn Coed Comprehensive in 2009 and then at Duffryn High in Newport .

“The lack of black head teachers boils down to unconscious cultural bias,” he said.

“When I left Cardiff University in 1992 with a degree in biochemistry and chemistry the first 14 jobs I applied to I did the ethnic monitoring and did not get shortlisted.

“For the next lot I just applied as Daniel Wilson born in Cardiff and was shortlisted. None of these were teaching jobs.”

Mrs Edwards became her village school’s first black teacher when she came to Wales with her Welsh husband.

“I went to work in a school where everyone was white but to me it was important to be working there.

“The children could see me and see their teacher was black. In all the years I was there only about five times did a child say to me that my skin was a different colour.

“I never wanted to be a head but I did become head of early years there.”

Mr Wilson believes being smart is even more vital for black teachers to counter views of some children that “black people wear bling and have dreads”.

“I have had dragons embroidered on to my shirt cuffs. Year seven children see those and ask me about them and about being Welsh.

“As a black teacher I have a unique opportunity to talk about social issues with pupils.

“It is a perception about how successful you can be. Being a parent and teacher I see the influence parents have on career choice as important.

“The challenge to me is the interview panel. Until we have more black governors the tendency will be to employ like people.

“It is depressing there are not more black head teachers but I see advances happening.

“There needs to be more black parents becoming governors. If you want to make a difference become a governor.”

“Bringing staff such as Mr Wilson in benefits pupils by opening their eyes.

“He has promoted the idea of black scientists and we have black pupils in school who he can empathise with too.”

In Blaenau Gwent, where Mr Wilson works, data obtained under Freedom of Information shows none of the 25 head teachers there are black and while four of its 492 teachers identified as black, mixed race or ethnic minority, it is understood Mr Wilson is the only one of those who is black.

One of the few minority ethnic heads is Ravi Pawar, head of Blackwood Comprehensive.

Owen Hathway, Wales Policy Officer at the National Education Union Cymru, said: “Schools are a microcosm of society and it is right that the teaching staff in a school reflect that.

“Ensuring people of all backgrounds, race, gender and ethnicity consider teaching as a career is important in developing a base of different experiences and approaches to the teaching and learning in our classrooms.

“Respect for teaching as a profession needs to be given greater prominence across society in general as well as ensuring we work with organisations within the BME community to open up pathways to the sector which may not currently exist.”

Tim Pratt, director of ASCL Cymru, said: “ASCL is committed to supporting and promoting equality and diversity in both the teacher and the school leader workforce. We agree that BME professionals are underrepresented at all levels in education and are working to change that.

“Our equalities plan identified the need to work with our own leadership appointment services and other partners to support governors to be more aware of their responsibilities under the Equalities Act in order to build a more diverse school leader workforce.

“In England we have raised the issue of equalities in leadership appointments with the DfE, ministers and senior civil servants. In Wales it is a matter we intend to pursue as a priority with the Welsh Government.”

The NAHT Cymru has been looking at what might affect numbers of BME teachers entering the profession and whether there is evidence of discrimination.

Policy director Rob Williams said duties are set out by Welsh Government in the Equality Act 2010 (Statutory Duties) (Wales) Regulations 2011 which came into force in April 2011.

“One of the big barriers to headship for those with any protected characteristics is around the issue of governors and others who will be responsible for making appointments.

“We have long argued that there should be mandatory training for all governors and we believe that no governor should be involved in recruitment without the right level of diversity and inclusion awareness training.

“However until the numbers of BME candidates entering initial teacher training and education in the first place is addressed any high aspirations the profession and other stakeholders may have to encourage more BME head teachers to be appointed will be almost impossible to achieve.”