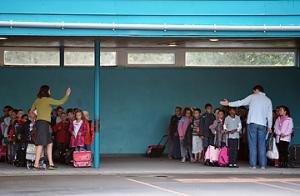 This post is in partnership with Worldcrunch, a new global-news site that translates stories of note in foreign languages into English. The article below was originally published in Le Figaro.

There are too many women in English schools, declared British Prime Minister David Cameron. In order to restore authority in the classrooms, Cameron thinks that the presence of male teachers — who can show both “strength and sensibility” — should be reinforced as soon as possible. The idea has been given some thought in France as well.

An advisor close to French President Nicolas Sarkozy said “there are too many women teachers” and that the situation should be “more balanced.”

“By reforming the whole profession, by offering a better salary, we hope to attract more men to the job,” said a source close to the president. “Lots of women become teachers because it’s a profession that suits their way of living. They tend to work part-time, which causes many organizational problems. What we want are teachers who are 100% involved, who are better paid but also more present in schools.”

Like other western countries, France has seen an increasing feminization of education over the past 60 years. The rate of women teachers in primary schools went from 65% in 1954 to more than 82% nowadays. In private schools it peaked recently at 91%. In secondary education, the gap is still present, although less extreme.

The causes for such disparities are well-known. Men turn their backs to teaching because the profession has lost prestige. Moreover, young men very often opt for scientific studies that are more likely to lead them to job opportunities that come with a higher salary than teaching.

Overall, men and women also appear to have different conceptions of the profession. French researchers Jean-Richard Cyterman and Alain Lopes found that women, when asked why they chose to become teachers, usually answer “to be able to work with children” or “to keep a healthy balance between professional and personal life,” or “because it was a vocation.” A common response from men, in contrast, is that they wanted “to work in public service.”

In a 2008 report about working conditions in education, French education expert Marcel Pochard stated that an equal representation of men and women seemed to be “almost out of reach.” But national education authorities should be careful, he warned, and “try to avoid a complete feminization that could be blamed for giving a biased vision of society to pupils.”

Another education scholar Jean-Louis Auduc shares that opinion. In a recent essay called “Boys First,” Auduc notes that jobs linked with childhood and adolescence are becoming the exclusive domain of women. During their school years, boys suffer from a lack of a male role models, he argues.

Is that why boys don’t do as well as girls at school? They’re more agitated, they tend to fail more easily and a smaller number of them manage to earn high school diplomas. But things may be more complex. Studies carried out in several countries have suggested there is no obvious link between the teacher’s gender and academic success. What matters most is the quality of the teacher-student relationship, according to Michèle Asselin and Gisèle Bourret, two Canadian researchers.

Those who struggle the most at school are young people from poor families who also tend to be attached to traditional, stereotypical gender roles. “They sometimes challenge the authority of women teachers,” a French teacher says. Specialists agree on one point: there should be more men in schools, if for no other reason than to oppose the idea that education has become a “women’s matter.”