on November 29th, 2010 Posted By BG in World News
by Lauren Novak - The Advertiser 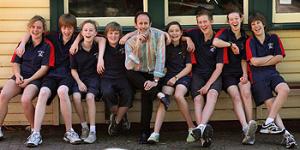 Fewer than one in five students studying teaching in the state’s universities and TAFEs are male as the exodus of men from schools worsens.

South Australian Tertiary Admissions Centre figures for 2009 show there are 152 males (or 19 per cent) and 650 females enrolled in teaching courses.

This compares to a ratio of one male to four females only three years ago. Australian Bureau of Statistics figures show there are 1923 more female teachers in SA than 10 years ago, compared with 138 fewer males.

Educators and academics are concerned the continuing decline of men in the profession will impact on children’s personal development during their formative years, leaving students without male role models.

The situation is most worrying in primary schools, with reports of as few as one male teacher for every 10 females in some schools.

Teachers say men may be put off a career in education because of the “feminised workforce”, perceptions of low pay and “maternal” duties, and social stigma arising from publicised child abuses by men in schools.

The Education Department has no targeted strategy for recruiting more men but says addressing the gender imbalance will be a key focus for a recently formed Education Workforce Taskforce.

Educators and academics, however, have called for a more concerted effort to target marketing to men.

UniSA’s associate dean in the school of education Kaye McCallum said it was important to have male role models in schools because of family breakdown and to give students the opportunity to build trusting relationships with men.

“Kids love male teachers in primary schools because they don’t get them very often,” she said.

Ms Brady said young men in teaching programs sometimes found they were treated with suspicion because they were males.

While he would not speculate on the reasons men avoided going into teaching, Mr O’Loughlin said he would like to see more males in schools.

Business SA chief executive Peter Vaughan, a former secondary school teacher, said the profession was failing to attract the best and brightest, who were more interested in law, accounting, medicine or commerce.

“There is such a range of other occupations available to university-qualified people,” he said. “Men find teaching a very easy occupation to not engage in because they have alternatives elsewhere that are much more highly paid and offer more rapid career advancement.”

This year, 24,922 women were registered to teach in SA, compared to 9764 men, although not all work as teachers.

“Some students don’t have access to males who are non-aggressive, thoughtful, polite . . . and in those foundation years (for) very, very young children . . . one of the few places they can have that is at school.”

Australian Education Union state president Correna Haythorpe defended the teaching profession as “inclusive but said the union had not asked the department to consider a quota of male teachers or targeted recruiting of men”.

“We believe that it is the quality of the teacher, not necessarily the gender, that makes a difference in the classroom,” she said.