on July 2nd, 2015 Posted By BG in World News
By Neil Lyndon - The Telegraph 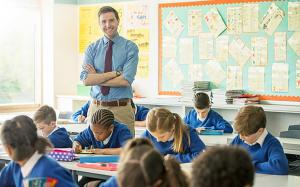 Mothers outnumbered fathers at our primary school sports day last week in the normal ratio for a day in the working week – maybe 10/1.

Among the staff and volunteers organising the event, however, women outnumbered men by more like 20/1.

The only man making his presence felt was the nerd with the unusual enthusiasm for PA systems who is always allowed to install the mics and loudspeakers – with the result that every announcement flies away inaudibly like chaff on the wind.

The staff personnel board at the school’s front door, which displays a photograph of everybody working there, includes at present not a single male face. The Department for Education claims that one in five new primary teachers is a man, but that figure is contradicted by the evidence of one’s own eyes and also by more reliable sources.

My own wife has had a peripatetic role in primary education for 20-odd years and she reckons that she has come across roughly one man for every 12 women teachers. The Telegraph reports there is a slightly higher number of male primary school teachers: around 12 per cent.

My wife has a feeling that she might have seen slightly more men in schools in recent years; and that notion seems to be borne out by official figures. In a statement to Telegraph Men, the DfE said: “The latest figures show record numbers of men training to teach in primary schools – with 3,400 more in primary classrooms since 2010.”

“Record numbers” may be questionable. “Since when?” a sceptic might ask. When I was in primary school in the 1950s, male teachers outnumbered women by about three to one. Most of my teachers had served in the Second World War and some were battle-hardened toughies for whom controlling a class of nine year-olds was a well-earned stroll on easy street. All remembered the Great Depression and had entered the teaching profession because it offered a safe job with a dependable pension. In that long-lost age when many people believed that their own public service would help to build the New Jerusalem promised by Attlee’s Labour government, those ex-soldiers, sailors and airmen also believed, I am certain, that they were doing something socially worthwhile and worthy of respect.

They also, of course, were paid more than women. The conventional presumption of the time was that a woman would leave work to look after her own family when she married and that a man’s income needed to be enough to support them all. After equal pay for men and women teachers became the norm in education in 1961, primary school teaching rapidly became a female preserve. Along with the longer holidays and shorter working day that were ostensibly on offer (and thus greater flexibility to look after their own children), women were encouraged to see themselves as more naturally possessing the “caring” and “nurturing” qualities that would fit them for working with children. More than a million women now work in education – approximately one in 10 of all women at work.

At the same time, men as a whole were increasingly being portrayed in feminist-dominated culture as predatory beasts who are a menace to children and women alike. As the TES survey reveals, men who might like to become primary school teachers today are worried that they might be seen as latent or active paedophiles, or otherwise unmanly.

Whether or not the absence of men as teachers in primary school has any bearing on the steep decline in the academic performance of boys in recent years (and there seems to be no hard evidence on this question), I do know from my own direct experience that many young women of the 1960s and 1970s went into teaching inspired by a feminist mission to raise the self-esteem and the social position of girls. I could name at least half a dozen women teachers I knew personally in the later decades of the last century who were proud to say that they favoured girls in class to make up for the oppression of women in the past. The moral dubiety – and outright sexist prejudice – of inflicting second-class treatment on little boys who could bear no personal responsibility for those alleged (and profoundly questionable) historical crimes never seemed to trouble those apostles of equality.

By the same token, I can name a similar number of feminist commentators in the media/political establishment who celebrated the rise of educational attainments for girls in school as evidence that females are, by birth and nature, superior to males. As girls overtook boys in grades and exam results at all levels throughout the education system, those sisters were cock-a-hoop at their gender’s triumph – never acknowledging that the advantage of one sex must have been bought at the expense of the other. Not one Secretary of State for Education in the last 40 years has expressed concern that the gender divide in academic achievement reflected a worrying ethos in schools that imposed disadvantage and inequality on boys. They wouldn’t dare.

It’s not at all clear what can now be done. Men – having no sense of brotherhood to match the sororal feelings of women – are hardly likely to become primary school teachers because they feel they owe a duty to their sex. They are not going to enter the profession so long as it automatically brings them under the suspicion that they might be harbouring sexual feelings towards children. They are not going to train to become primary school teachers so long as that job would bring them less respect and social standing than running the dodgems at the fair. How likely is it that any government would launch a programme to improve the position of boys at school and the standing of male teachers to match the expensive STEM campaign – rightly approved by everybody – to get more girls into science, technology and industry? About as much chance as an audible announcement at our primary’s sports day.

Meanwhile, however, things are looking up at that school. The head teacher recently announced that a man would be joining the teaching staff next autumn. Hearing this, the boys celebrated as wildly as if they’d been given an extra week off school. They’re all assuming that, for the first time in the whole of their education since nursery, PE will at last be run by somebody who knows how to trap, chest and head a ball.

God help the guy who’s taking the job if he’s not interested in football. Or Sports Day.