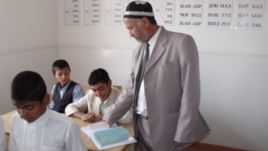 It’s been less than a year since Sidiq Abdulloev got a job in a school in the southern Tajik town of Qurgon-Teppa.

But the 24-year-old teacher is leaving for Russia, swapping his chosen profession for manual work on a construction site or potato farm. The reason? Abdulloev says wages are unrealistically low in Tajik schools.

“A teacher’s salary is disproportionate to living costs,” he says. “For example, a jacket and pants cost 800 somonis [about $170] but my monthly salary is 500. How can you manage? Should I buy a set of clothes and a tie, or buy food?”

Low wages have prompted thousands of male teachers like Abdulloev to quit their jobs in Tajik schools to look for better incomes elsewhere. The Education Ministry says schools are in dire need of male teachers who — in the words of one official — possess “more assertiveness and authority” with students than their female colleagues.

In a bid to stem the outflow, the ministry has proposed a law that seeks to make teaching a more attractive prospect for men.

The bill, currently before parliament, envisages new perks and privileges for young teachers, both male and female. But along with benefits such as free health care, financial awards, and discounted accommodation, the bill also effectively exempts teachers from compulsory military service.

The two-year service in the Tajik Army — notorious for appalling living conditions in military barracks, inadequate food, and widespread bullying — is hugely unpopular among young men, many of whom try to evade the army at any cost.

Lawmaker Marhabo Jabborova says the hope is that the exemption from military service combined with other privileges will help to lure male teachers back to schools. “Of course, [the privileges] make it attractive for young male teachers to work in schools,” he says. “Nowadays, most employees in the health-care and education systems are women.”

It’s not only schools that lack male figures in Tajikistan. More than 1 million Tajiks — or one in seven citizens — work in Russia as migrant laborers because jobs are in short supply in their impoverished, mountainous homeland. Most of those migrants are men between 18 and 60 years of age.

Some of them return home during the winter, while others visit their families only once every two or three years. Many children grow up without seeing their fathers for years.

Besides elderly men and young boys, there are notably few men in the bazaars, farms, or streets, especially from early spring to late summer — a period Tajik villagers know as the peak season of labor migration.

“With the shortage of men in families, we need male teachers as role models in schools,” school principal Ruhullo Juraboev says. The veteran educator says having male teachers in schools is “especially crucial” for teenage boys growing up in households where men can be absent for years.

Juraboev heads a public school in the village of Qarotogh, west of the capital, Dushanbe. He says only seven out of nearly 100 teachers in his school are men.

Four of those male teachers are young university graduates whom the principal invited from neighboring villages last year. Juraboev says he has offered them “the highest possible wages the school budget could afford” along with reimbursement for their transport costs, since the teachers commute to Qarotogh five days a week.

Women Can’t Do It Alone

Juraboev echoes widespread concerns in the education sphere that an average monthly salary of about $50 is by no means enough to keep male teachers in schools. “It’s slightly different for women, because in Tajik families men traditionally are considered the main breadwinners of their households,” he notes.

According to official figures, female teachers make up 60 percent of the country’s nearly 95,000 schoolteachers.

Such a ratio exists only on paper, however. Schools turn a blind eye to male teachers’ absences for most of the academic year as they are engaged in seasonal jobs in Russia. Despite only turning up at their schools during the winter months, many male teachers get paid for the entire year.

At the Education Ministry, Abdusamad Mulloev, who oversees the public-school department, insists the emphasis on male teachers and attempts to keep them in schools do not undermine female teachers’ work or role in schools.

Earlier this year, Dushanbe police opened a criminal investigation into the involvement of teenage boys in a brawl in which several students suffered knife injuries. The incident has been widely linked to a lack of male teachers in the students’ school.

Mulloev insists the lack of men in schools is an issue that cannot be ignored. “It’s not fair to abandon the entire education system to women,” he says. “With all due respect to women’s kindness, schools also need the authority and discipline male teachers provide.”

Back in Qurgonteppa, young teacher Abdulloev is packing his bags. The benefits promised by the government haven’t changed his mind. “Well, I might get free medicine and a parcel of land, but still I would have to cope with my ridiculously small salary,” he says. “No, thanks.”