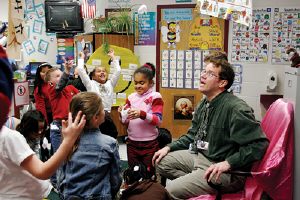 At Little River Elementary School in South Riding, second-grade teacher Timothy Bjorseth, affectionately known as “Mr. B,” is one of only six male teachers among a faculty of 45.

A 10-year instructor in education, Bjorseth said he was even more of a minority at the first elementary school where he taught in Illinois. He said he was the only male teacher that school had seen in 10 or 15 years.

When deciding to pursue a career in education, Bjorseth said he did not waver because he’d be a minority as a male.

“I was not going to say, ‘I want to be a lawyer’ because there are more women [in teaching],” he said. “I didn’t think that was a big factor.”

Aside from a few exceptions, Bjorseth sees no problems working mostly with women.

“What’s kind of quirky is that when you go to the teachers’ lounge, there are lots of conversations I’m not familiar with. Baby showers, wedding showers and weddings. I don’t really relate,” he said. “That’s awkward. That’s when I feel like an oddball. But otherwise it’s been great.”

A visit to Mr. B’s colorful classroom proves the kids don’t mind having a male teacher. During a recent math lesson, it was nothing but giggles and enthusiastic learning.

Amid the chatty women and noisy blow dryers at Leesburg’s Hair Savvy salon in Market Station, hairstylist Brandon Choyce snips away at the dark, cropped hair of one of his female clients.

Dressed in jeans and a sweater, Choyce blends in naturally with his surroundings despite the fact that he remains the lone male hairstylist of eight working at the salon.

“I definitely get teamed up on, picked on, you know,” he said, displaying a big smile. “[Female co-workers] try to tell me what to wear. If my hair doesn’t look good, they’ll tell me right away.”

Choyce has been working as a stylist at Hair Savvy since 2002, after earning his cosmetology license in Arlington. His mother, Patti Nolan, opened Hair Savvy in 2000.

After getting a feel for the business through his mother, Choyce said his decision to become a stylist was pretty easy. It seemed like a fun job with a lot of benefits, like a flexible schedule, and you could make a living too. “I figured I’d give it a shot.”

At 18, he said entering a female-dominated field wasn’t a concern. “At the time, I was like ‘cool, sweet, sounds good.'”

After working in the profession for a few years, Choyce said he’s learned a lot about how to communicate better with the opposite sex.

“Early on, I did bang heads with some of [the women] because I’d want things done a certain way and they wouldn’t want to do them that way. So, my kind of dominant male ego was trying to push them to do something,” he said. “Now, we kind of all work together.”

Choyce said the stigma associated with male hairdressers doesn’t bother him. An avid outdoorsman, he considers himself an “atypical” hairdresser, but said that times are changing.

“A lot of guys like me are stepping into the business and realizing it’s pretty cool. When you get out there and get involved, it’s a lot of fun.”